But more important they are all signatories to a letter, now numbering over 1300 musicians, authors, songwriters, poets, composers, actors and other cultural creators, co-sponsored by Music Canada and the Writer’s Union of Canada and supported by The Canadian Independent Music Association (CIMA), The League of Canadian Poets, The Canadian Music Publishers Association, The Playwrights Guild of Canada, The Canadian Country Music Association and Canadian Artists’ Representation/Le Front des artistes canadiens (CARFAC), to Canada’s Minister of Canadian Heritage, Mélanie Joly. That is a pretty impressive array of cultural firepower.

Joly, a lawyer with law degrees from l’université de Montréal and Oxford, has been immersed in cultural activities from her student days and became, at the politically tender age of 36, the Minister of Canadian Heritage. In Canada, at the federal level, that is as close as you get to being responsible for cultural issues, since under Canada’s constitution culture is a provincial responsibility. Still, Canadian Heritage has broad cultural responsibilities at the national level. In partnership with the Department of Industry (Industry Canada) it is responsible for copyright legislation. It also controls significant subsidies, such as funding the Canada Council for the Arts and for setting policies in areas such as publishing and Canadian content on the airwaves. (Heritage has a grab-bag of other responsibilities as well, from funding Canadian athletes, to promoting bilingualism, to organizing royal visits). 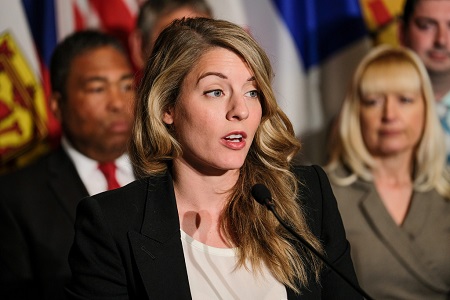 In April of this year Mme. Joly (left) launched a root-and-branch review of Canadian cultural policy to bring it into the digital age. At the same time, the mandated five year review of Canada’s copyright legislation will take place in 2017. This will be a chance to examine to what extent the major revisions that were made to the Copyright Act in 2012 have stood the test of time, and where copyright legislation needs further change or rebalancing. These two reviews provide the context for the letter from the artistic community, which urges Minister Joly to “put creators at the heart of ...upcoming cultural policy reforms”.

What exactly does this mean? The text of the letter makes clear the main concern is that many artists are being “squeezed out of the marketplace”, with full time creativity becoming a thing of the past. This of course does not apply to the big names in the first line of this blog, or to many other financially successful artists, but it is a fact that many creators struggle financially. This has always been the case of course, with a few writers, directors, musicians, songwriters and so on becoming rich and famous, while many others toil in the vineyard for minimum wage, or less. The sponsors of the letter contend, however, that creators are generally worse off now in the digital age than they were in the pre-digital world of the 1990s, despite having worked hard to adapt to the new digital realities. There is a feeling that digital platforms have been very profitable for some, but the wealth has generally not trickled down to content creators on whom much of the online world depends. As the letter phrases it, “...our work is increasingly used to monetize technology without adequately remunerating its creators. Income and profit from digital use of our work flow away from the creative class to a concentrated technology industry”. Blogger Terrica Carrington has aptly described the issue as “It’s Time we Stopped Romanticizing the Myth of the Starving Artist”.

New technologies have spawned applications that have resulted, among other things, in the commoditization of news content through online aggregators and the proliferation of online mash-ups using copyrighted works without or with minimal payment. E-books and online music streaming have fundamentally altered business methods and models. The profits from search, aggregation, and social media platforms have grown exponentially while generally speaking the economic benefits have not been shared proportionally with most of the content industries, even as new technologies have enabled creators to expand their reach to more consumers. While the creators who signed the letter would like Minister Joly to put them at the heart of policy reforms, what actually are they looking for, and what actually can be done?

The Minister of Heritage has a number of tools in her toolbox, ranging from direct subsidies, like the 700 million dollars provided annually to the CBC, to setting the rules covering various funding mechanisms, such as the contributions that Canadian audio-visual platforms (cable distributors, satellite platforms, etc.) are required to make into a Canadian content production fund. Various other proposals have been floated such as new levies or taxes on ISPs or Over-the-Top content distributors like Netflix, or on internet advertising. Needless to say, all are controversial as they would inevitably impact the consumer, although many would argue that is the price to pay to maintain a healthy cultural sector in Canada.

Another area to look at is copyright regulation, where there has been a trend to granting of wider fair dealing exceptions, driven by Supreme Court rulings requiring that fair dealing be interpreted in a broad and liberal manner. These rulings, along with new exceptions introduced in the 2012 Copyright Act revisions, have significantly eroded revenues for book publishers, especially publishers of educational books as I discussed in an earlier blog, Access Copyright vs. York University: High Stakes for Canadian Culture. Publishers would like the very broad educational exception narrowed in the next round of Copyright Act revisions.

In undertaking her cultural policy review, Mme. Joly appointed a blue-ribbon advisory group, representing a cross-section of the cultural industries. This group will be providing key input to the Heritage Department. It is clear, however, that individual musicians, artists and writers also want to provide input into decisions that could shape Canadian culture for the next decade or more. Their professional associations provide a means to do this, and the growing list of signatories to the letter to Mme. Joly is a direct outcome of this concern. So, if you are a Canadian actor, author, composer, filmmaker, playwright, professional musician, music supervisor, poet, professional photographer, record producer, songwriter, visual artist, a combination of some or all of the above or an “other”, and if you are concerned about the future of Canadian culture in the digital age, you can join Alanis and her colleagues by adding your voice through this link. Speak out. Melanie Joly is listening.

IPA note: this blog post was originally posted on Hugh Stephens' blog and is reproduced here with permission of Hugh Stephens.