WIPO Director General Francis Gurry fired the starting gun on the 32nd Standing Committee on Copyright and Related Rights (SCCR), today, urging the participants to agree on the elusive broadcasting treaty, which has lain on the table since 1996.

In his opening comments, DG Gurry presented a stark choice: find a route through the deadlock or spend “another 20 years” talking. His impatience mirrored the mood in parts of the chamber at the way the broadcasting discussion “sucks the air out of the room”, as one attendee put it. 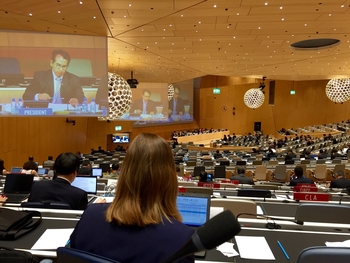 As scheduled, day one was spent considering definitions of key terms in the draft broadcasting text, a conversation that's due to continue through Tuesday and possibly into Wednesday.

The interminable impasse over broadcasting has become an irksome, but necessary, diversion that’s holding up the rest of the agenda items. Unfortunately, this includes the questions of greatest relevance to the IPA and its members: limitations and exceptions for libraries and archives, and limitations and exceptions for educational and research institutions and for persons with other disabilities.

Of course, we’ll report on these matters as they come up, but the IPA’s interest in attending the SCCR meetings goes several strides beyond the mere substance of the discussions; it’s a precious opportunity to make publishers’ voices heard among the world’s copyright stakeholders, many of whom support the IPA’s positions, and some of whom do not.

In addition, the IPA continues to coordinate the Creative Sector Organization group, in Geneva, comprising representatives from the music, film, writing and other stakeholder groups that promote and protect copyright. This leadership role enables the IPA to align copyright proponents and agree strong common strategies during the meeting.

Check back tomorrow afternoon for the next update.