Two hot potatoes in particular injected extra vim into the SCCR discussion today, drawing parties on either side of the copyright fence into an exchange of views that, had we been in a pub and not at WIPO, might have led to indecorous behaviour from some.

Committee chair Martin Moscoso opened the floor to the NGOs present – the IPA among them – offering a valuable chance to shape the country delegates’ understanding of the impact of their decisions.

In contrast to other parts of the meeting, where the chair’s invitation for comments from the countries was met by silence, the NGOs were tripping over themselves to have their say. This was our moment.

Knowledge Ecology International (KEI) recommended restrictions on parallel trade from countries with lower incomes, adding: 'We would make further exceptions in countries where (...) there is a lack of available work in the country (...) or where there's an excessive pricing problem or other anti-competitive act.'

Next it was the turn of Electronic Information for Libraries (eIFL.net), which defined PI as 'an access to information' issue: 'Libraries are not allowed to import a book for non-commercial purposes because of rules designed primarily to regulate consumer markets relating to the sale of goods.'

And then, donning his STM hat, IP legal eagle Carlo Scollo Lavizzari, who’s also here for the IPA, told the chamber: 'The discussion on parallel imports could benefit from clarifying what works and what formats of works are being discussed, and the distinctions between parallel imports of genuine grey goods and other articles. So it's a broad stroke to discuss this topic, which normally in the past for physical goods was considered more of a trade issue than an issue of copyright law.'

CSL then went a step further, suggesting that the matter be either subsumed by another topic, or even struck from the agenda altogether.

IPA Secretary General José Borghino then took the mic, drawing on his personal experience of the parallel imports issue in Australia.

He told the chamber: 'The interesting thing about the parallel import 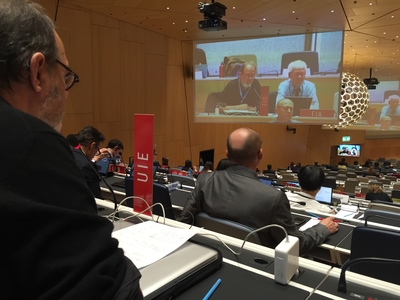 restrictions in the Australian Copyright law is that it allows libraries to import two copies of books from anywhere in the world. It's purely a trade issue on the ground and, in that sense, the IPA wants to keep it as a trade issue. We think the most appropriate way of dealing with parallel imports is a national territorial one. And it will allow for such flexiblity as the Australian act has.'

The dialogue then moved on to the slightly hotter potato of cross-border uses.

In an impassioned monologue, the representative of librarians' body IFLA said: 'The internet has no borders, therefore the notion that libraries and our users should be forced to deal with 100-plus national flavours of exceptions is unworkable, ludicrous and a failure of the international copyright system. This proposed exception may be the most important of all those being considered by SCCR.'

Curiously, the eIFL cited the following example as a failure of international copyright mechanisms: 'In 2012 the British Library, one of the world’s largest research libraries, ceased its overseas copyright-based document supply service to protect the library from claims of copyright infringement. The service was replaced by a publisher-approved licensing scheme. Data shows that the service, a lifeline for hard-to-find information for the research community, has since fallen off a cliff edge. The number of satisfied requests fell by 98%.'

But after the meeting, Carlo, who is very familiar with the British Library case, told me: 'While it's true that the British Library did regularise its international document supply service through a framework agreement that was welcomed by rightsholders, it’s also true that there’s a roughly 20% drop in demand for document delivery every year by most copyright-compliant document suppliers. This is partly because other channels of supply are becoming more common, such as consortium licences, social document supply through Research4Life, permitted sharing among academics and document rental agreements.

'The decline of one channel of distribution is not indicative of an under-supply, but only of a different supply, which is possible often because of advances in technology. Decreases beyond the overall negative growth of 20% experienced by specific suppliers may be attributed to various factors, although copyright seems not to be one, since other suppliers continue to supply the same territories without reporting licensing problems. Some of the supplies previously characterised as non-commercial, in line with licensing agreements, are continuing, albeit they are now considered commercial users – these deliveries have not fallen away but are continuing under a separate licensing arrangement the British Library has with the local collecting society, the CLA.'

And finally, I made my first SCCR intervention, reading a statement (vanity shot below), 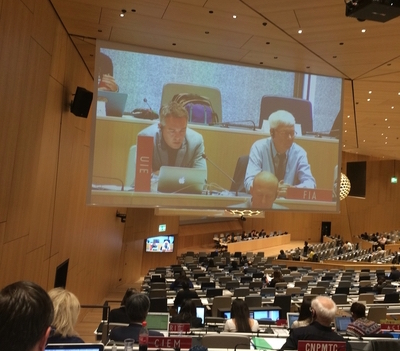 highlighting that while the IPA doesn’t want to prevent the cross border flow of information, the issue would be best regulated according to the following five principles: