The IPA team joined a US delegation breakfast briefing this morning, high up on the 13th floor. A superstitious person may have hesitated to attend, but this was a golden chance of valuable face time with some key SCCR influencers. At the table were stakeholders from all sides of the copyright debate: policy makers, consumer groups, librarians, lawyers and NGOs.

Discretion dictates that I don’t divulge any details of the discussion, but I can say that US delegate head Dr Michael Shapiro reaffirmed what was said on Monday: the US position is largely unchanged, and his delegation is approaching SCCR 33 more circumspectly than usual, pending guidance on his future policy direction. In short, it’s up to President Trump.

Today’s climax, however, was another epic presentation by Singaporean professor Daniel Seng, 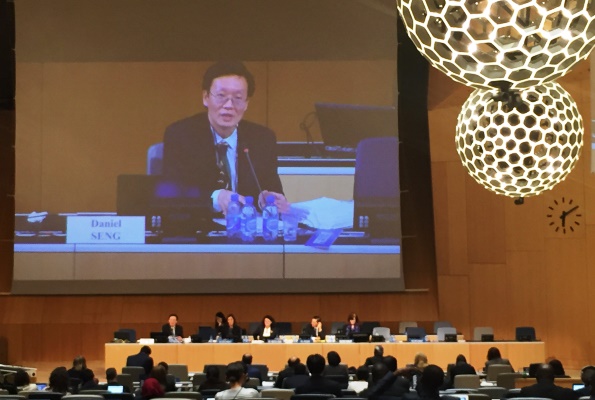 who’s been commissioned by WIPO to produce an exhaustive, granular study on copyright limitations and exceptions for educational activities. I reported on that during SCCR 32, but his study has taken major strides forward in the past few months.

Prof. Seng struck a slightly apologetic, albeit erudite, tone in opening, saying: ‘Shakespeare said “brevity is the soul of wit”. But at 1,009 pages this study is not an example of brevity.’ What is more, the study is (by his own admission) a ‘work in progress’, so it will just keep ballooning.

He then proceeded to lay out the mind-boggling scale of his endeavour: tracking, categorizing and analysing exceptions and limitations relating to educational activities in national copyright legislation of all 189 WIPO Member States. No one has ever produced such a comprehensive map of the world’s Es & Ls in education before. Quite how he did it is baffling. His magnum opus will potentially become a bible for policy makers around the world seeking inspiration in their work. 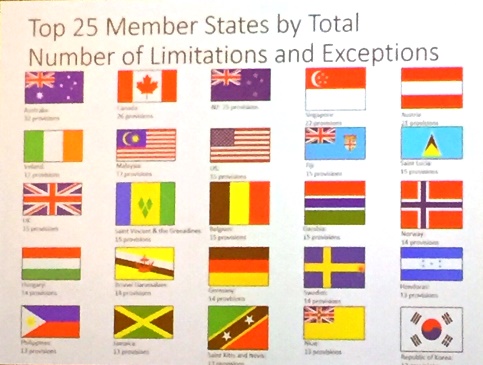 Before starting the deep dive, Prof. Seng offered a brief scene-setter to rouse the chamber and remind the delegates of their core purpose when addressing this particular agenda item. Education is a fundamental human right that does not begin and end at school, he told them. It starts at home, continues in educational institutions and does not stop until we die. And with that, he began to reel off the numbers.

First off, he told us that, of the 189 WIPO Member States, every last one has at least one exception and limitation provision for educational activities in its legislation. These fall into six separate categories: private / personal use; quotations; reproduction; publications; performances and broadcasting communications / recordings.

At the top of the scale is Australia, with 32 individual provisions. ‘Australia would be the champion of exceptions and limitations if this were a competition,’ the professor quipped.

Listing the nations with the most provisions, including Canada, New Zealand and Singapore, Prof. Seng described an important commonality. ‘These are Member States that are members of the British Commonwealth of Nations,’ he said. ‘In other words, it could very well be that the number of provisions in national legislation is a reflection of the fact of the common law heritage that these Member States have.’

For me, the take-home figure of the day was the simplest: in total, the 189 countries have 1,553 separate provisions. This alone paints a picture of a world where governments have already come up with a vast range of ways to circumvent copyright legally so that educators can execute their indispensable mandate.

The sheer volume and diversity of legal provisions for limitations and exceptions that exist makes me wonder what on earth the SCCR is doing. Why is it pondering an international legislative instrument to cover something that's already been so competently addressed at national level? As my grandfather used to say, if it ain’t broke don’t fix it. 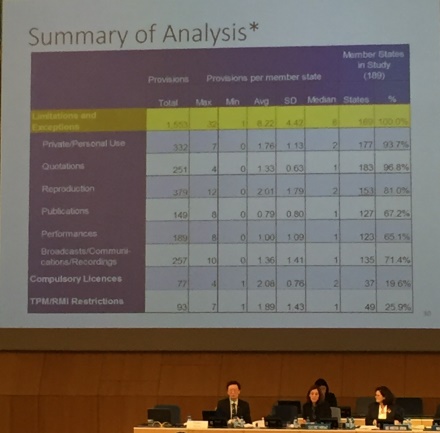 As Prof. Seng himself pointed out, his report (written version here) provides lawmakers everywhere with a readymade smorgasbord of legislative solutions from which to pick and choose at leisure.

What is more, beyond the redundancy argument against an international instrument on exceptions and limitations in education, an even more compelling argument is the impossibility of delivering one. Education is best served up locally: local educators working to a local curriculum using locally created materials. So what net benefits can a treaty provision really bring?

I was obviously not the only one in the room to have reached this conclusion. In the closing Q&A, the Iranian delegate asked the professor: ‘Is harmonization of national legislation for exceptions and limitations for research and education necessary, or not?’

Prof. Seng picked his words carefully: ‘This study places before the delegates a bird’s eye view of every world jurisdiction; you can now decide which policies best suit Member States for your own implementation. For example, Australia has a good model, so we copied it in Singapore. Same when we copied Safe Habour from the US Copyright Act. What we’ve done is open this tool for Member States to take national legislation to the next step. I will take this to my own policy makers about to how to improve our national legislation.’

Let's hope the SCCR delegates are similarly struck by Prof. Seng's work, and that they take his insights into the discussions ahead.