A little later, André Myburgh, a lawyer on Carlo’s team, intervened on behalf of STM publishers to draw the committee’s attention to the liability of librarians and orphan works, and the benefits of licensing as a solution.

He said: ‘STM’s position on copyright-protected uses of orphan works ... (is) that users who have not been able to identify, locate and contact the copyright owner to obtain permission, despite a diligent search, must not be penalised if the rightsholder comes forward later. An STM signatory statement offers exactly this safe harbour in respect of the uses of works considered to be orphan works which are then discovered to be works in which the signatories – comprising the largest STM publishers and many more - own the copyright. STM continues to advocate this principle, both in public fora and in the publishing industry.

Licensing has in our experience supported library document delivery services, resulting in the liability of libraries not even coming into the question. With the main interest of publishers being in the broadest possible dissemination of the works they publish, STM believes that there is much scope for licensing services in solving this problem.’

However, the Statement of the Day Award goes to Mike Holderness, who chairs the International Federation of Journalists (IFJ) Authors’ Rights Expert Group. I make no apology for reproducing it here wholesale since the extremely topical ideas it encapsulates and expresses so eloquently deserve all the exposure they can get. Enjoy:

‘I have a confession. I am a journalist – an author. And now – more clearly than at any recent time – the world needs ethical journalism. Despite the failings of newspapers in some countries recently, the work of individual, independent journalists remains the best bulwark against arbitrary power and the gaining of that power through a mixture of falsehood and rumour amplified by the echo chambers of electronic gossip. 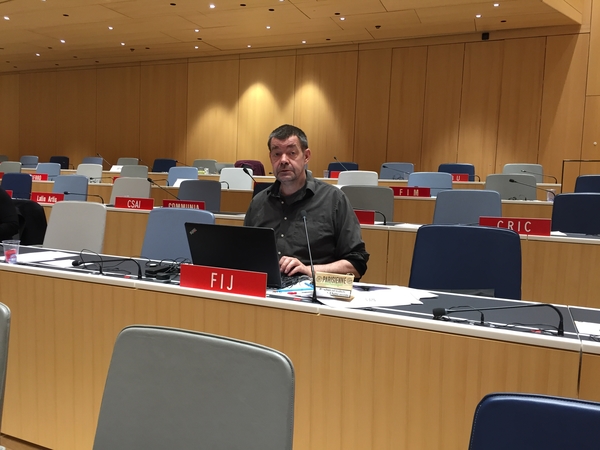 I write and edit reports on science and technology in London. My ability to make a living – like that of every independent, professional author – depends on the strength of authors’ rights laws, the future of which we are once more here to discuss. I want to stress the need for professional authorship. The promise held out by some that the internet era would usher in a golden era of democracy has proved hollow. A vast exchange of prejudices and lies through anti-social media is not, I suggest, true or useful “free expression”.

Citizens of all our countries need to have the chance to be informed through the work of people who commit themselves to building the skills and experience to evaluate claims and unmask falsehood. Those people – those journalists in particular – need to have the economic security that enables them to stand up to power (including that of newspaper and broadcasting owners when necessary).

That publishing has been hurt badly by the internet revolution is well-known – not least because publishers have some influence and capability to tell us so. It has been hurt in particular by internet corporations that eke out a fortune selling advertising alongside other people’s creative work. How to get those corporations to pay for their use of this, their prime raw material, is a challenge that is causing head-scratching in the European Union, as it must here, soon.

I therefore appeal to this Committee not to be swayed by the promise held out by some that opening up creative works to use without remuneration offers some kind of golden era of free information. The risk is that free information ends up being worth every penny.

Yes, let us have international norms that give libraries, archives and educational institutions the legal certainty they need to play their utterly essential part in ensuring an informed citizenry.

And let us insist that, throughout the world, those vital institutions are adequately funded and that the use they make of authors’ work is compensated. Because as libraries move online, and as libraries form partnerships with those internet corporations, some of their activities increasingly resemble publishing and these parts of their activities affect the incomes of authors like me.

Useful information depends on authors having adequate primary income. The proposed new EU directive securing more transparency in the way authors’ work are exploited by their publishers, producers and broadcasters is a step in the right direction. WIPO should by inspired by it.

Let this Committee re-dedicate itself to enabling “innovation and creativity for the benefit of all” through defending the rights and incomes of individual authors. After all, without the work of skilled authors and performers libraries have nothing to share; schools nothing to teach; and this Committee nothing to discuss. This Committee needs to re-focus on supporting creativity. Please do.’