And so ends another SCCR marathon: hundreds of delegates locked in some 40 hours of discussion over five days; only God knows how many mini-sandwiches, cups of undrinkable coffee and MBs of data have been consumed.

The IPA put in a strong showing this time. For the first time ever the IPA delegation included its President (elect) and the Chair of the copyright committee. Add to that the Secretary General, our razor-sharp legal counsel and, well, me, and we were a distinctly visible presence in the crowd.

Having been wrapped in the copyright bubble since Monday and talked of little else between the hours of 9am and 7pm, I get a sense that there has been a definite shift in humour.

Frustration and possibly a vague embarrassment over the impasse has peaked and is spurring the chamber to action on the broadcasters treaty; the inside track is that a diplomatic conference may be announced as early as SCCR 34, from 1-5 May 2017.

Here's Carlo Scollo Lavizzari to tell you how he thinks it went:

This morning Melbourne Law School Intellectual Property Professor Sam Ricketson was beamed into the chamber to give a lengthy webcast presentation on the Artists’ Resale Right which, while not immediately linked to the IPA’s policy agenda, is nonetheless an important area of interest for creators.

Some countries, particularly from Africa Group, are pushing hard for rollout of the Resale Right. Prof. Ricketson said a growing number of countries have adopted the right into their law over the past 10 to 15 years, particularly among Berne Convention member countries.

In the afternoon session, the IPA made a written submission to the SCCR on educational exceptions and limitations, having been denied the chance to speak to the chamber. The reason for this was that the room was so preoccupied by the other agenda items, including the resale right, that it left no time for the NGOs to intervene on this matter.

The IPA is the global association of book publishers, including those in the trade, educational and academic sectors. Our 64 member associations from 59 countries represent thousands of individual publishing houses, which together serve more than 5.5 billion people across the globe.

The IPA has long stressed the importance of the ‘local’ in education publishing. We have often stated that the best curricula are pointedly local, as are learning environments and cultural contexts. Great education embraces local content and context.

If a government neglects the economic framework around local publishing, then healthy domestic educational publishing markets are undermined.

‘Neglect’ can take the form of overbroad exceptions, which lead to unintended consequences. Take, for example, the 2012 copyright amendments in Canada, which have had ongoing and long-term deleterious effects on not only the local publishing industry and Canadian authors, but also, we would argue, on the availability of high-quality educational resources for teachers and students alike.

The impact of these Canadian amendments on publishers has been immediate and severe, with a number of publishing houses scaling back their operations and at least one global player, Oxford University Press, packing up and leaving the country, citing the copyright amendments as a prime reason.

But these amendments have also increasingly forced Canadian authors to publish for US or other foreign markets. Publications produced for foreign markets will, however, always be a poor substitute for the ideal, which, as we’ve argued, would be locally sourced and locally produced. Such foreign-sourced publications will be detrimental to the general coherence and objectives of a sound national educational policy.

In education, so much depends on the quality of the resources being utilized by teachers in the classroom for the benefit of the particular mix of students before them. In Canada, it is not just the provenance of the materials that has been compromised by the 2012 amendments, but also their quality.

High-quality educational publishing requires intensive, long-term investment. Publishers are now telling us that they are pulling out of the Canadian educational market precisely because the medium- to long-term prospects are so grim. This will mean fewer local authors, writing less local content, for fewer local publishers to produce fewer high-quality Canadian resources. This will not be good for Canadian students. 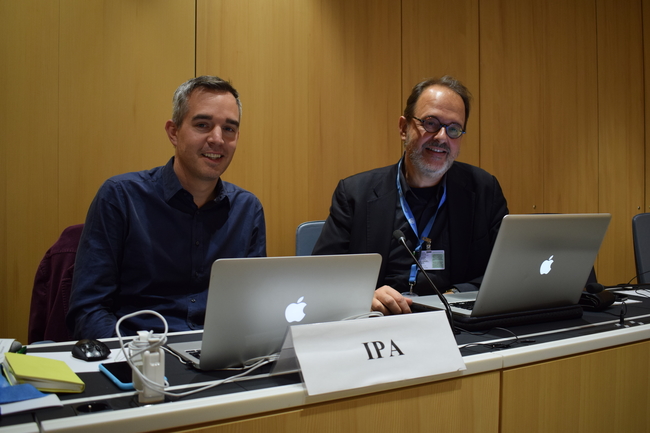 A consequence of the local nature of education publishing is that one-size-fits-all exceptions are unnecessary and inappropriate. As Professor Seng’s work demonstrates, Member States have largely succeeded in formulating their own state-specific education exceptions suited to their unique local conditions. An inflexible international instrument that does not respect local conditions will harm, not help, efforts to achieve the worthy goals of educational exceptions.

The IPA respectfully requests that SCCR take into account the need for balance and respect for local interests and not foreclose local markets and licensing solutions. Otherwise exceptions are bound to have a negative effect, especially where multiple copying is concerned.

Well, that's pretty much it from the WIPO Diary for SCCR33, although I'll post the chairman's summary when it becomes available, likely next week. Have a great weekend!

Great catching up on your posts Ben; thanks for all outtakes from sccr33, all best Ger

0 Cancel Reply
Great catching up on your posts Ben; thanks for all outtakes from sccr33, all best Ger
Cancel Update Comment