The 36th session of World Intellectual Property Organisation’s Standing Committee on Copyright and Related Rights (check our jargon buster here) kicked off today in Geneva. As well as the 191 Members States who can attend, there are about 60 NGOs registered and participating (including the IPA, STM, IFRRO and others from the Creative Sector Organisations group that IPA coordinates). 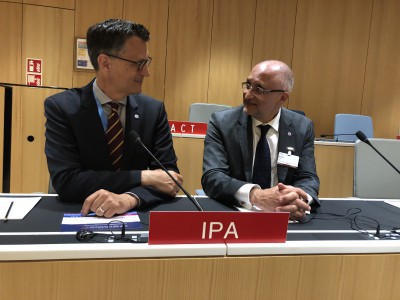 This morning, the agenda was quickly adopted and the country groups (Africa Group, Asia Pacific Group, CACEEC, CEBS, Group B and GRULAC) presented their introductory remarks and most expressed their support for the Draft Action Plans that were developed by the WIPO Secretariat as a basis for ongoing discussion (IPA will share our thoughts later in the week).

And with that the chair (Daren Tang) moved things on and we are now into the thick of discussion on the Broadcasting Treaty which should go on until close of business on Tuesday.

Part of IPA’s delegation has already arrived with IPA President Michiel Kolman and IPA Vice President Hugo Setzer being joined by IPA’s Legal Counsel, Ted Shapiro and André Myburgh. Tomorrow, Jessica Sänger from the Börsenverein as well as Daniel Fernández and Antonio María Avila from the Spanish PA (FGEE) will touch down, to be joined by William Bowes of the UK PA on Wednesday.

IPA’s SCCR began early this morning with a meeting of the Creative Sector Organisations (CSOs) with the GRULAC group. This was an opportunity for rightsholders to learn about any evolution in the position of this group of Latin American and Caribbean nations that have been one of the main proponents of broadening exceptions and limitations across education, archives and libraries. We also shared opinions on the progress of the Broadcasting Treaty.

The first side event of the week was organised by the International Association for the Protection of Intellectual Property (AIPPI) and featured Professor Doctor Jan Bernd Nordemann and Remy Chavannes who, in front of a packed room B, presented different examples of case law on linking and making available on the Internet before presenting the AIPPI resolution on the issue.

The afternoon session featured some remarks from the Director General of WIPO, Francis Gurry who encouraged progress on the Broadcasting Treaty and expressing his interest in the discussions on the resale right and rights for theatre directors, before Member States moved into informals off-site. Some of us stay in the Plenary Room monitoring what is said although we are strictly forbidden from reporting it, while others take the opportunity to meet with WIPO officials, and other NGOs like IFLA. Already, today we have squeezed in six of these meetings.

Interested souls can stream the week’s meetings here. We’ll be back with another update tomorrow.

Tweet
Tags:
SCCR
3 things to look out for at WIPO SCCR 36
Words always find a way!