The different regional groups and a number of national delegations took the floor to express their support or opposition to normative (law-making) work on exceptions and limitations for education, libraries and archives. Seasoned WIPO-watchers will have been familiar with the positions taken. No-one disagreed with the DAPs per se, but discussions will continue tomorrow and it’s unwise to make unequivocal predictions. More on IPA’s position on DAPs below. 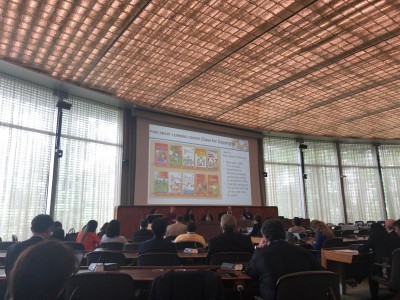 The day’s side event was co-organised by Education International with the support of the Indonesian delegation under the title How WIPO can contribute to achieving the right to education. The line-up saw speaker after speaker make an aggressive case for exceptions and limitations for educational uses.

The issue was introduced as two sides of the coin with authors and users as the concerned parties, with a profit-driven lobby – publishers? – obstructing progress. The first speaker, Unifah Rosyidi of the Indonesian teachers’ union presented what she called the paradox of accessibility and affordability for teachers versus economic value and personal gain of authors and wondered whether there might be a win-win solution. She presented the PGRI initiative which aims to reduce the risk for teachers and students of prosecution for copyright infringement through the creation of Open Educational Resources (OERs).

Teresa Nobre of Communia painted a dark picture of classrooms being unable to use copyrighted materials for educational purposes and railed against the EU draft Directive and its inclusion of licenses as an alternative to exceptions for educational uses. Caroline Morgan, the CEO of IFRRO, was quick to put forward a comprehensive rebuttal of the Communia case.

Brianna Schofield of Authors Alliance, newly accredited NGO at WIPO but already well-known as not a friend of copyright, argued that academic authors are very open to exceptions because they want to use of their work to advance knowledge, help build their own ‘reputational capital’ and increase the impact of their work. We would say that academic authors are most implicated in the ‘publish or perish’ economy and most invested in the reputational capital created by STM publishers.

Professor Michael Geist of the University of Ottawa attempted to counter the testimony put forward by IPA Vice-President Hugo Setzer at the Canadian Copyright Review on 9 May about the situation in Canada following the 2012 legislative changes to the Copyright Act which inserted an exception for fair dealing for education (undefined). Professor Geist painted a rosy picture of a Canada where licensing has increased along with University spending, publisher revenues and profits. The work of John Degen upends this analysis and points to a very different reality.

The IPA was bemused to hear how, in this side-event world authors were characterised as being unsupportive of copyright, how licensing could be presented in such a negative light, and how collective licensing could be so completely absent from Geist’s dystopian vision of Canada.

William Bowes of the Publishers Association (UK) challenged the assertions made about publishers and exceptions. He explained that litigation has championed the contribution that high quality educational materials make to the Canadian market. Producing those materials requires skills and resources that cost money. Copyright enables publishers to recoup their investments, ensuring that the students of tomorrow continue to benefit from the ongoing supply of academic content of highest quality and breadth.

After the drama of the side event, the SCCR’s afternoon session saw observer organisations like the IPA given our opportunity to comment on the DAPs. IPA President, Michiel Kolman, supported them, while stressing the IPA’s opposition to normative work on exceptions and limitations for education. He reminded the Committee of IPA’s successful side-event last year where educational publishers from Brazil, Mexico, South Africa and the United Arab Emirates made the case for stable legal frameworks that encourage local investment in high-quality content. You can read IPA’s full statement here as well as statements from EFJ, FIAPF and ICMP.

For a first time SCCR participant like myself (and after some high points of synchronicity yesterday) it really felt like ‘us and them’ today. A frustrating state of affairs that makes it difficult to see routes for constructive progress.

The IPA’s delegation is now complete and the day included meetings with the German, European and Canadian delegations, as well as an off-site visit to the World Economic Forum.