It’s over. There were a few last-minute huddles of regional groups and Member States to thrash out possible compromises on agreed wording, but the 36th meeting of the Standing Committee on Copyright and Related Rights (SCCR) came to a close this afternoon.

The IPA met with a number of national delegations at the beginning of the day before a meeting of the Creative Sector Organisations group with the African Group. IPA shared some of the outcomes of our Regional Seminar on Sustainable Publishing in Africa organised in Lagos last month in which the local African publishing sector was critical of their governments' asking for a broadening of exception at WIPO. We also stressed the importance of capacity building on the ground so that local, affordable and culturally relevant educational materials can be produced.

We returned to the plenary room to discover that ‘informals’ and group coordination meetings were continuing off-site. This time, however, we were unable to listen in, with rumours circulating that Member States were unhappy because some observers broke the rules by reporting on yesterday`s discussions.

Late in the morning the delegates came in and the Chair, Daren Tang, moved at lightning speed. Amendments to the Draft Action Plans (DAPs) were adopted (thereby becoming APs?).

Then for other business: there was still no agreement on bringing the Resale Royalty Right onto the agenda as a standing item; the WIPO secretariat will prepare terms of reference for a study on copyright in the digital environment with a particular focus on the music industry; and finally, the Russian Federation presented its case for a study on theatre directors’ rights. The day closed with a surprising recommendation on the Broadcasting Treaty.

IPA counsel, Ted Shapiro summarised his three take-home points from the week as:

IPA has managed to see all the major regional groups during this week (GRULAC, Asia-Pacific Group, African Group, Group B and CEBS) as well as a large number of delegations from Member States, taking full advantage of the valuable presence of our President and Vice-President as well as representatives from our members from France, Spain and the UK. 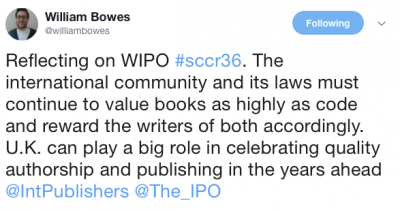 We will share the Chair's Summary of the week once it is made available on the WIPO website.

The rhythm fluctuates over the week and, as we had warned, it can be glacially slow but the debate over exceptions and limitations for Libraries, Archives, Museums (LAMs – an update for the jargon buster) is far from over. As for Education, it is ever more critical that educational publishers bring their experience to the debate. We will work with our members, and continue to bring their experiences and expertise to this vital and crucial debate.

The next SCCR will be the last week of November: stay tuned.

WIPO Diary (SCCR38) Day 2: An informal day in the chamber but buzzing around it