If you’re not a regular WIPO-watcher you could be forgiven for having forgotten what happened back in May when the 36th session of WIPO’s SCCR confounded expectations and appeared to make progress on the Broadcasting Treaty. Back then there was even talk of a Diplomatic Conference (or DipCon in the jargon) to turn the 20 years of negotiations into an actual treaty. Remind yourself what happened last time by having a quick read through our blog diaries and our jargon buster.

This morning, beneath the giant baubles of WIPO’s conference hall, we all had our earpieces in as WIPO Deputy Director General, Sylvie Forbin, took the floor to welcome delegates and urge them to use the week to make good progress on the different agenda items before them. (The official page for all SCCR37 documents is here.) The morning session brought no surprises as SCCR Chair Daren Tang of the Singapore IPO called the delegates to have ‘dynamic’ discussions. The draft agenda was adopted and delegations delivered their opening statements pledging a constructive approach to the discussions. The schedule for the week will see the Broadcasting Treaty take up the first two days before we move on to exceptions and limitations for libraries, archives, educational and research institutions and for persons with other disabilities. 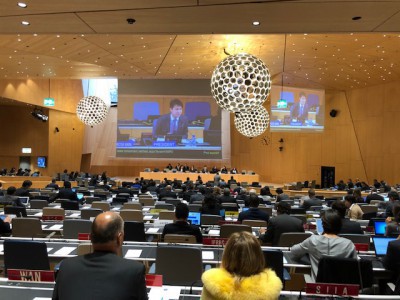 The diplomatic niceties of congratulating the SCCR Chair and the WIPO Secretariat were mixed during the morning session with approving mentions of two proposals (by Argentina and The United States) which promised to make progress on the Broadcasting Treaty. Time will tell. 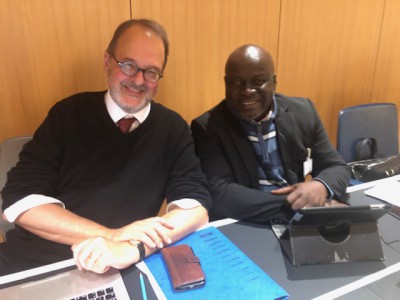 The afternoon session opened with NGO observers presenting their views on the Broadcasting Treaty before the session moved to informals (discussions away from the plenary chamber but where observers can listen in) for technical discussions. By strict agreement, we cannot give details on progress in these ‘informals’ but can report that there was copious work on the current Treaty text.

As is normal, there was no side event today at lunch time, but an exhibition from Kyrgyzstan and an evening reception closed the day’s proceedings. The IPA maintains a watching brief on the progress of Broadcasting Treaty, making sure that it is not held ransom to those delegations that demand there be a treaty on exceptions and limitations in exchange for any treaty on broadcasting.

Tomorrow’s side event is organised by Knowledge Ecology International and will focus on Broadcasting Treaty. On Wednesday, the agenda shifts to matters of exceptions and limitations.