Following yesterday’s exceptions and limitations marathon, today was a much shorter affair as the SCCR raced through the agenda. The morning session kicked off with NGOs asked to comment on the progress (or, in the eyes of many civil society organisations, the absence thereof) around exceptions for archives.

That round of comments completed, Dr Yaniv Benhamou took the floor to present his report on Copyright Practices and Challenges of Museums. Delegates and NGOS were then given the opportunity to ask questions and provide comments. IPA Secretary General, José Borghino, shared IPA’s comments on the study. He noted IPA’s belief that guidelines, as already used by many museums, can be useful as long as they are voluntary and non-binding and that there is no danger of exceptions becoming business models. You can read the full statement below this post. 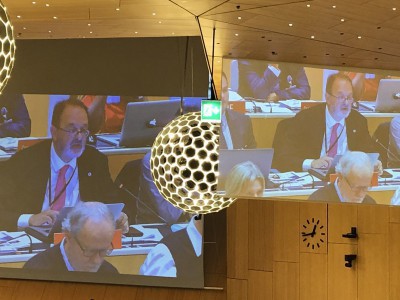 The round of comments brought to a close the agenda items on exceptions and limitations and meant that the afternoon session opened ‘other matters’ which had been slated for Friday, starting with the Artist Resale Royalty Right. As a reminder, there are a number of WIPO Member States calling for this issue to become a standing SCCR agenda item. The WIPO Secretariat confirmed the creation of task force to explore this issue which would meet on 13 December 2018. A number of individual delegations expressed their support for this item, with Japan and the United States being the major countries still unable to agree.

Discussions then moved on to the Russian proposal for increased protection of theatre directors’ rights. Following discussions at SCCR 36, WIPO presented the modalities for a study. While a number of delegations were unsure of whether there was any need for multilateral work on this issue, they generally welcomed a study to gather more information.

There were no side events today but an IPA delegation had a constructive meeting with the another regional Group where we underlined the importance to local publishing industries of national, not international, solutions on exceptions and limitations. The IPA’s delegation in Geneva was also complemented by the presence of Anne Bergman-Tahon and Mathilde Renou from the Federation of European Publishers who took time away from the trilogue discussions on the EU Copyright Directive to follow the discussions on exceptions and limitations in Genevq. (Photo of Anne and Mathilde)

The afternoon session finished a little after 4pm with a number of observers a little surprised at the early finish but happily taking advantage of the extra time for informal discussions. Tomorrow will start with the copyright for digital music discussion before moving back to the Broadcasting Treaty and further work on the Chair’s revised consolidated text. A demain for the final instalment of this SCCR daily blog. 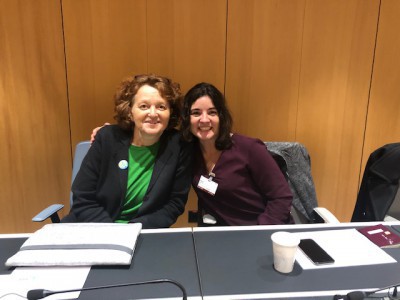 IPA Statement on copyright practices and challenges faced by museums:

Thank you, Mr Chairman, the International Publishers Association, the IPA, has read with great interest the study by Professor Benhamou of Geneva University.

Museums and publishers in many parts of the world are in co-publishing agreements and, like museums, publishers are very often both users and originators of creative works and publications. The research paper makes interesting reading. We note in particular the frequent references to the Association of Art Museum Directors’ “Guidelines for the use of copyrighted materials and works of art by art museums”. We assume that these Guidelines in the US do not have the force of law but represent an honest attempt by museum directors to define what uses can reasonably be made under fair use in the US. Publishers in many parts of the world have similar guidelines referred to as “permission guidelines” for re-use of materials in other publications. IPA believes that guidelines are useful as long as they are voluntary and non-binding. This apparent need for guidelines, in particular in the US and other jurisdictions with flexible exceptions and judge-made law, demonstrates that fair use on its own is an insufficient and vague concept to be applied in uniform and consistent ways.

We would also like to note that very often the reproduction and creation of catalogues also have commercial ends. In this regard we note, with approval and a sense of reassured relief, the concluding remark of the research paper which I shall quote: “We have not identified any exception that would unambiguously allow museums to commercialize high quality reproductions and merchandizing of protected works.” Finally, IPA is in full agreement that no such exceptions should in fact have been found – they would turn exceptions into business models and replace exclusive rights subsisting in creative works as the rule. Thank you, Mr Chairman, for giving us the opportunity to add our comment to this fascinating topic of copyright licensing in today’s practice at museums world-wide on behalf of the IPA.”

More posts from author
Tuesday, 21 September 2021 Changing of the guard on the board of the Accessible Books Consortium
Friday, 04 June 2021 The SDG Library: lessons from Norway on inspiring the next generation
Monday, 30 November 2020 WIPO SCCR 40 Day 4: Wrapping Up

Every Story Matters - an EU project on diversity

Why is COP 26 a critical moment for the climate and publishing?