Every year, early in May, Iranian publishers have the busiest time of the year with the Tehran International Book Fair being held for a period of ten days in the capital. All publishers - except those who have been banned due to previous violations - gather from across the country.

Punished publishers that are banned from participating are usually those who received a complaint in the previous rounds of the book fair for having inappropriate books in their stalls. This is, of course, an absurd situation since every book published in Iran has gone through a long and brutal scrutiny process and received an official permit. However, officials sometimes say some books are better not being easily accessible to the public and the book fair is one of example of how they could be! 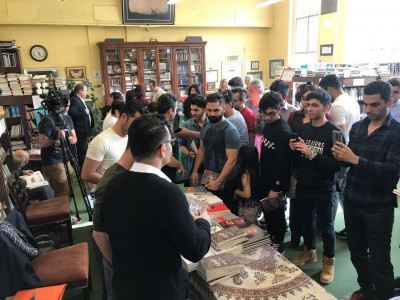 Apart from Iranian publishers, many foreign publishers also attend the fair but there is one group of publishers which is not tolerated under any circumstances: the independent publishers outside the country that publish Persian books without Iranian supervision and permission. These publishers are strictly forbidden from being a part of the biggest book event of the country and thousands of titles published over the past 40 years since Iran’s Islamic revolution are considered as an illegal commodity.

Over 3 million Iranians have migrated from Iran since 1979 and are scattered around the world with large communities in the US, Canada, UK and Germany. Among these are hundreds of exiled authors, translators, publishers and artists who did not stop to create and grow. At the moment around 12 active independent Persian publishers work outside the country, excluding self-publishers and those publishers with less than 5 titles a year. They have published fiction, poetry, history, biographies, research and political titles.

With them living apart from each other and not having easy access to a large community of Persian speaking readers, they struggle. They are not seen and heard, their valuable books are not read enough and financial challenges limit them in expanding their business. Almost all of them have a second job to help them earn their living in order to protect the publishing.

In 2016, Nogaam e-Publishing in London founded the first ever Persian book fair outside Iran to address some of the aforementioned issues. They called it “Tehran Book Fair, Uncensored” and held it symbolically at the same time of the real book fair in Tehran. Now, millions of words protected from the censors’ blades had a home to come together. It was the first time that these publishers who knew each other more or less could come under a roof, to discuss common problems and find solutions collectively. Eight publishers from different countries in Europe and the US found the opportunity to introduce their work to Iranians living in the UK. 700 people visited the fair but still, it was limited geographically. 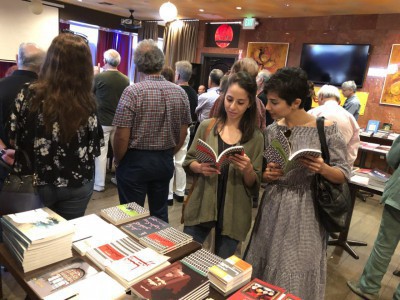 One year later in May 2017, after the success of the first fair, an alliance of Persian independent publishers planned and held the second “Tehran Book Fair, Uncensored”. This time, it started from London but traveled as a tour to eight more cities in the Europe such as Paris, Amsterdam, Berlin, Stockholm and even a small version in Toronto and LA.

It seems that determination and persistence of these freedom fighters are endless. Without any external support and with minimum means, the third book fair started on 4th of May in London with 11 publishers and after three days continued its journey to 15 more cities in the Europe and US, visiting cities like Copenhagen, Hamburg and Vienna for the first time.

In their statement, they say: “This book fair is an opportunity to showcase uncensored books written in Farsi. Our aim is to give voice to diverse thoughts, beliefs and ideas. In order to stop uniformity and monotony dominate our thoughts and literature, we provide new books every year with diverse voices for our readers. We hope for a day, near in the future, that we need an ‘uncensored’ book fair no more.”