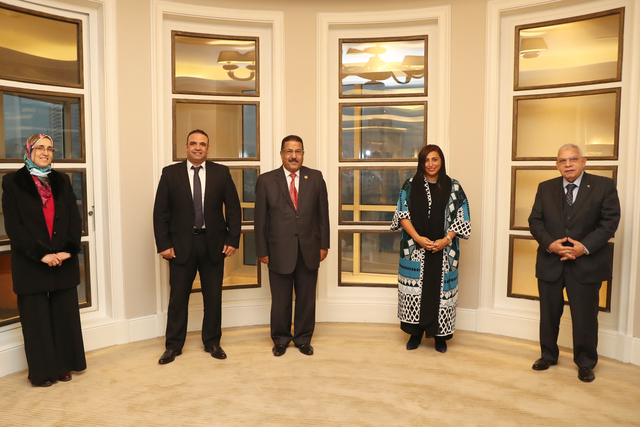 Bodour bint Sultan Al Qasimi, President of the International Publishers Association (IPA), has stressed that IPA is focusing on establishing effective commnication with publishers associations worldwide, in order to discuss the developmental challenges facing businesses in the pandemic-induced economic climate, and help them design agile business models to ensure their growth and sustainability.

To this end, the IPA President said, “We plan to conduct a series of meetings with publishers worldwide. The first one was with the Arab Publishers Association (APA) and the Egyptian Publishers Association (EPA), in view of the unique opportunities that lie before the region’s book industry owing to the high percentage of youth in the Arab world, which is among the highest globally. The region’s youth are actively seeking knowledge; highy receptive to new and creative content. This offers a unique incentive to publishers in our region.”

These remarks from Bodour Al Qasimi – the first-ever Arab woman and second woman in IPA’s leadership history to be elected President – came during a meeting with the APA and EPA in Cairo, Egypt.

This meeting marked Bodour’s first official engagement since she was conferred her new position at IPA. At the meeting, she stressed that challenges and opportunities in the Arab publishing landscape will remain key points on IPA’s agenda for the next couple of years. Bodour Al Qasimi emphasised to the meeting’s participants and the region’s publishers in general, that IPA would stand firmly behind them and offer them the support needed. She affirmed that there would be a continuous exchange of ideas and experiences between IPA and its regional association members in the Arab world, to ensure that the former keeps abreast of the latest industry developments in the region, and identify effective mechanisms to assist the exporting of Arabic content to international markets.

Shedding light on the roles of specialised committees at IPA, Bodour encouraged publishers to play a more active role in IPA and its committees.

She reiterated to the meeting’s participants that IPA’s key role was to safeguard publishers' rights, and unify their vision and efforts to nurture a supportive and peer-driven environment for the publishing community worldwide. Bodour Al Qasimi went on to explain that IPA’s mandate is to create and sustain conditions ideal for the advancement of the publishing industry, and that the Association’s key focus was on copyright and freedom to publish.

On the impact of COVID-19 on the publishing sector, Bodour opined: “The pandemic has offered the regional industry an opportunity to reevaluate current business models and replace them with more agile ones, with a strong focus on pushing the agenda of digital publishing.”

Bodour Al Qasimi also heard from member publishers of EPA, as they spoke about their efforts in advancing Egypt’s book industry through various initiatives including the launch of a digital platform which hosts publishers’ data and facilitates major business functions including logistics and marketing.

She went on to highlight the prominent legislations issued by IPA to help and support its members, in addition to discussing their recovery plans for the post-pandemic period, in which IPA prepared a report about the publishing industry’s experience during the pandemic. This report, entitled From Response to Recovery, was formulated after conducting interviews with 33 members of IPA from diverse backgrounds.

For his part, Mohammed Rashad noted that Bodour’s visit as the President of IPA acknowledged Egypt's status on the Arab and global publishing map.

Rashad conveyed requests by Arabic publishers keen on participating in workshops that would educate them about the latest industry developments, advance their knowledge and skillsets, and strengthen their presence in international markets.