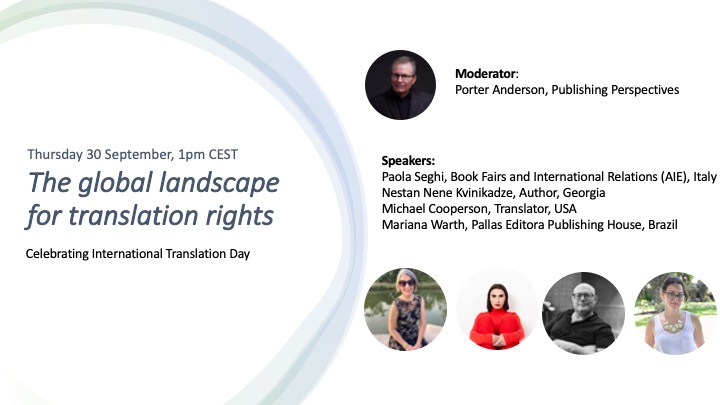 Publishing Perspectives Editor in Chief, Porter Anderson, guided experts from Italy, Brazil, Georgia and the U.S.A.  as they brought their takes as authors, publishers, and funds on the importance of translations in the international book market.

You can watch the full session here:

Paola Seghi of the Italian Publishers Association (AIE) spoke about the 20 years of work that has ultimately led to Italy selling rights to more books than it buys. She underlined the importance of government support and Guest of Honour programmes at book fairs as a key factor in their success.

Brazilian publisher, Marian Warth, spoke about the valuable support she had received from the Brazilian Publishers Association, CBL, which continued during the pandemic and meant that translation licensing was still possible.

American translator, Michael Cooperson, opened by thanking publishers for their work in bringing translations to readers. Cooperson, a Sheikh Zayed Book Award winner for his Arabic translations, spoke about the challenges translators and publishers face between pure translations and adaptations and the particular challenge in Arabic between classical Arabic literature and contemporary literature. While many translations are considered niche, he noted that some manage to break through the niche market and attract broader attention.

Closing the session, Geogian author, Nestan Nene Kvinikadze, shared the Georgian experience following the country’s independence and the different steps, from the creation of professional associations for authors and publishers, to the establishment of a national book centre and ultimately engagement in Guest of Honour programmes that has kickstarted the translation of Georgian works abroad.