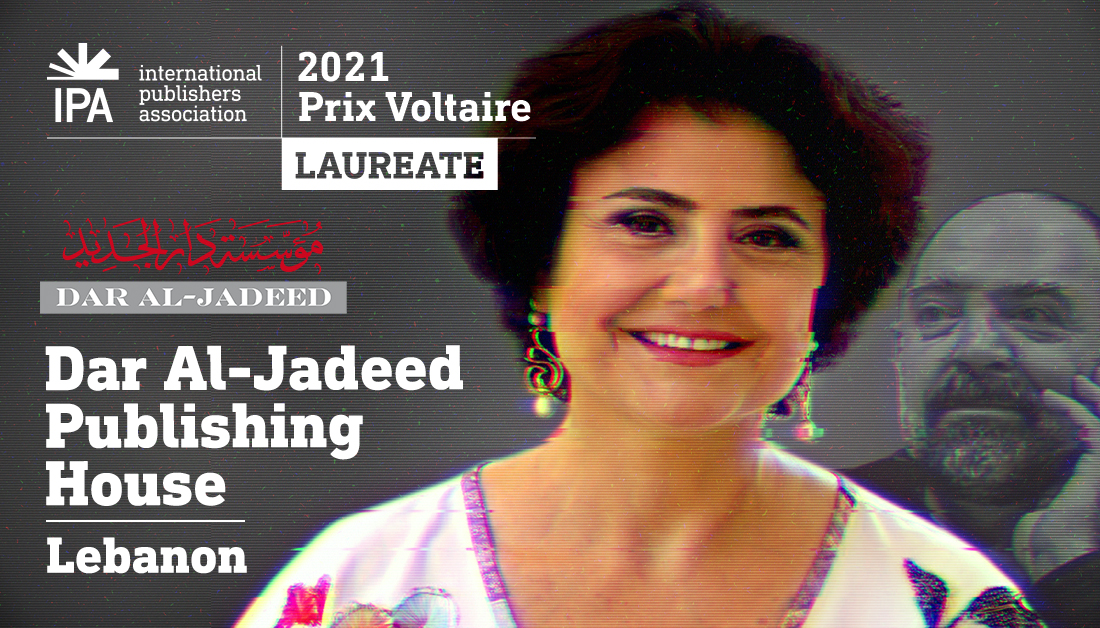 The International Publishers Association’s Freedom to Publish Committee has selected Lebanese publishing house Dar Al Jadeed to receive the 2021 IPA Prix Voltaire. The Beirut-based company was chosen from a shortlist of five nominees, who have all been recognized for their exemplary courage in upholding the freedom to publish and enabling others to exercise their right to freedom of expression.

Dar Al Jadeed Publishing House was cofounded in Beirut, Lebanon, in 2000 by Lokman Slim and his sister, Rasha al Ameer, to publish cultural works free from ideological conflict or partisanship. In February 2021, Lokman Slim was murdered after a campaign of threats and intimidation over his efforts to bring greater freedom of expression and open dialogue to Lebanon.

Bodour Al Qasimi, President of IPA said: Through the Prix Voltaire, the International Publishers Association stands with individuals and organizations which share our commitment and devotion to freedom to publish as a fundamental right. Publishers, and our colleagues throughout the publishing value chain, need to know that they have the collective support of the entire industry behind them when they face unjust persecution and censorship. This year’s Prix Voltaire laureate paid the ultimate price standing up for freedom of expression as an enabler of tolerance and conflict resolution in Lebanon. His loss is a loss to the entire international publishing community.

Kristenn Einarsson, Chair of the IPA’s Freedom to Publish Committee added: Dar Al Jadeed has experienced first-hand the dangers that can come with a commitment to freedom of expression and the free communication of ideas. Their bravery is an inspiration.

Earlier the same day the IPA will hold a Freedom to Publish seminar to assess the situation in Latin America and the wider world. Raul Figueroa Sarti, who was shortlisted for the Prix Voltaire and was awarded the Association of American Publishers International Freedom to Publish Prize | Jeri Laber Award on 17 November, will appear alongside Nicaraguan author, and Prix Cervantes laureate, Sergio Remirez, and Jerónimo Pimentel, head of Penguin Random House Peru.

The IPA has also announced a Special Award for Chinese author Li Liqun (pen name Li Huizi), an Independent Chinese PEN Center member who took his own life on 23 July 2021.

On the Special Award, Kristenn Einarsson said: The Freedom to Publish Committee only gives a Prix Voltaire Special Award for cases we feel are particularly noteworthy. Li Liqun’s efforts as a writer, political commentator and public intellectual were widely respected. The Committee is proud to recognize his work for freedom of expression.

About the 2021 Prix Voltaire

The different shades of censorship: from government pressure to libel threats and self-censorship

International and regional experts will look at the evolving challenges to freedom of expression and the freedom to publish. They will discuss how different types of pressure, whether directly from governments, through expensive defamation and libel cases or through social media can silence authors and lead anyone in the book sector to self-censor.

A number of different independent Belarusian publishers/publishing houses have been nominated with requests for anonymity for the individual publishers, due to the potential risks they face. These include harassment in the form of police visits, seizure of computers, books, blocking of books from export, investigations by tax and finance authorities, imposition of high fines for alleged financial irregularities and blocking of bank accounts. These tend to take place particularly after publication of books critical of the government.

Mikado Publishing in Turkey, founded in 2006. They have been prosecuted on charges of obscenity for the publication of a book called Where do babies come from? The publisher faces up to 12 years in prison with the case pending at the court of appeal. Mikado received the Turkish Publishers’ Association Freedom of Thought and Expression Award in 2020.

Samir Mansour Bookshop for Publishing had been a presence in Gaza for over 20 years before being destroyed in an Israeli missile attack on Gaza, in May 2021. The bookshop-cum-publishing house was a critical part of the local community and contained tens of thousands of books in various languages covering many subjects. It had been characterized as ‘a way to lift the siege on Gaza through literature’ by Mosaab Abu Toha, a poet and the founder of the Edward Said library.

Raul Figueroa Sarti’s political engagement saw him forced into exile in Costa Rica, although in 1993 he returned to Guatemala and founded F&G Editores, which has published more than 180 titles. Figueroa Sarti has promoted the organization of independent publishers in Central America, which led to the founding of the Independent Central American Group (GEICA), which became the focus for the dissemination of Central American literature internationally. In 2009, Figueroa Sarti faced a malicious judicial process designed to paralyze his editorial work, which resulted in a one-year prison sentence that was later suspended.

The IPA Prix Voltaire is unique in honouring the freedom to publish, without which many forms of freedom of expression would be impossible. Publishers who provide authors with a platform to disseminate their written ideas assume the same risks as the writers themselves.