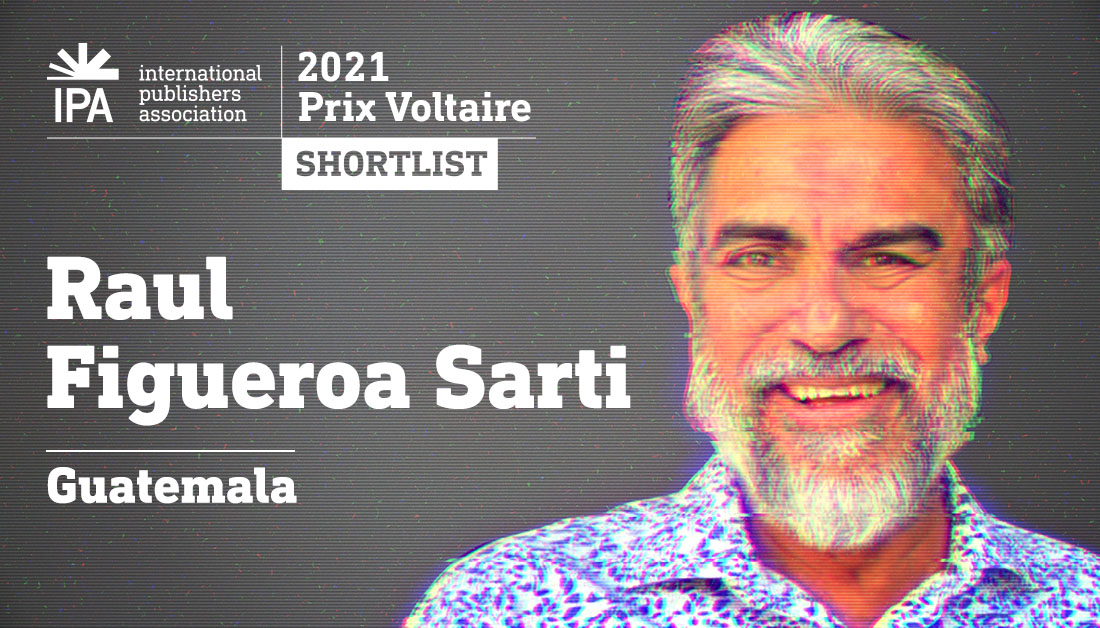 Of the 5 candidates who were shortlisted for the 2021 IPA Prix Voltaire, Raúl Figeroa Sarti stood out as the only Latin American. The prize, which is held annually, celebrates publishers (individuals, collectives or organizations) who have demonstrated courage and integrity in defending the freedom to publish in the face of threats, danger, intimidation, and harassment.

Mr. Figueroa Sarti’s nomination for the Prix Voltaire is an homage to his lifelong dedication to the freedom to publish, in spite of serious obstacles and dangers. Born in Mazatenango, Guatemala, his political engagement forced him into exile in Costa Rica during the 1980s due to the repression from the government. In 1993, he returned to Guatemala and founded F&G Editores, a publishing house which has proven itself to be one of the most important independent publishing houses in Guatemala and Central America. Originally specializing in law, F&G Editores has since transformed itself into a publishing house that values how books create culture and a sense of citizenship. Since its founding, it has published more than 180 titles.

In 2009, Raúl Figueroa Sarti faced a malicious judicial process that aimed to paralyze his editorial work and that initially resulted in a one-year prison sentence which was later suspended. F&G Editores was responsible at the time for printing a report by Guatemala’s Comisión para el Esclarecimiento Histórico (Commission for Historical Clarification), Guatemala Memoria del Silencio, as well as three other books that bring together information collected by the commission regarding the country’s civil war. The judicial harassment – as it was characterized by the World Organization against Torture – saw Figueroa Santi being falsely accused of plagiarism and of having violated intellectual property rights. According to the report, the harassment appeared to belong to a wider pattern of intimidation that occurs when the publishing house releases new content. He has subsequently been targeted by both the government and business groups who have launched a series of smear campaigns falsely alleging financial wrongdoing, among other allegations.

As a testament to his unwavering commitment to the freedom to publish, on November 17, 2021, Figueroa Sarti and F&G Editores was awarded the International Freedom to Publish/Jeri Leber Prize by the Association of American Publishers (AAP). In a statement, Maria A. Pallante, president and CEO of the AAP, declared that Sarti deserves recognition for “his extraordinary commitment to authors and readers despite the serious and numerous threats he has had to endure.”

In a statement expressing his gratitude for the recognition, Figueroa Sarti also made a point to comment that, “Beyond an acknowledgment of my publishing work in Guatemala, it seems very relevant that attention is paid internationally to the risks that freedom of expression and publication are experiencing today, both from central government and from the most powerful economic groups of Guatemala that fear their privileges are at risk.”

The 2021 IPA Prix Voltaire ceremony will take place on 30 November at the 35th Feria Internacional del Libro de Guadalajara and is unique in honouring the freedom to publish, without which many forms of freedom of expression would be impossible.