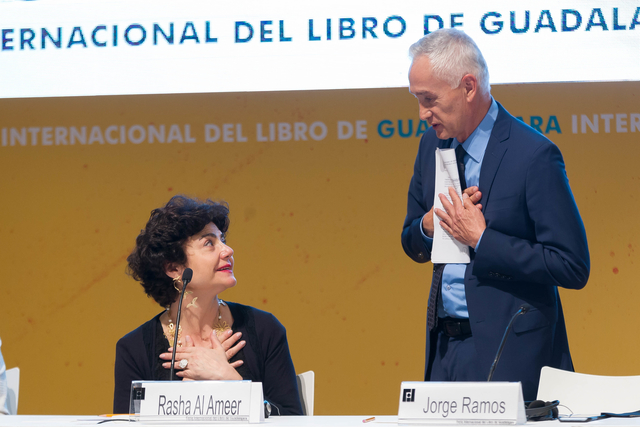 Voltaire and Lokman are not only smiling, they are now laughing … Words can do miracles

Prix Voltaire ceremony at Guadalajara International Book Fair honours Dar Al Jadeed publishing house from Lebanon. Journalist Jorge Ramos pays tribute to co-founders Rasha Al Ameer and Lokman Slim: ‘Thanks to you, people like me can speak freely today. I do not exaggerate by saying that we are here because of your courage and that of your brother Lokman. You have all my admiration and respect.’

An emotional 2021 IPA Prix Voltaire ceremony saw the convictions of Voltaire being evoked as a rapt audience of over 200 people heard how Dar Al Jadeed’s co-founder, Lokman Slim, had been assassinated 10 months ago for his commitment to the exchange of ideas. Speakers at the ceremony underscored the importance to democracy of the freedom to publish, emphasizing the bravery of publishers who support authors and journalists in holding those in power to account.

Rasha Al Ameer, co-founder of Dar Al Jadeed, the 2021 IPA Prix Voltaire laureate, attested that the award would bring hope to many: ‘By honoring Lokman and Lebanon, the International Publishers Association sends a clear message to the [Lebanese] people who think that the free world has lost its ethical compass. The Prix Voltaire is saying to the two victims [Lokman and Lebanon] : ‘you are not alone. The Prix Voltaire and what it represents is watching and listening, and will not be intimidated by the monsters: Lokman will not be forgotten, his projects should continue and the Lebanon that shares his values of accountability, transparency and justice should exist.’

Earlier in the evening Mexican journalist and Univision news anchor, Jorge Ramos, had said: ‘Freedom is teamwork. For every writer and journalist, we need a courageous publisher and editor willing to sacrifice his job, and sometimes his life, so that we can read a controversial book or get the news without censorship. Publishers and journalists should always say no to censorship. That doesn’t mean that we should publish everything that gets into our email. Our job is precisely to identify what is news and what is worth publishing, and what is not. Governments should never have a say in what we do.’

IPA Vice President, Karine Pansa, who presented the award, underlined the bravery and sacrifice of the 2021 IPA Prix Voltaire laureate adding: ‘I am a publisher and I am committed to the freedom to publish but would I be brave enough to publish a book that would land me in prison or put me and my family at risk? I am not sure that I could do that. And it is that kind of bravery that makes the people that we celebrate tonight such an inspiration.’

You can read the full speeches at the links below:

Photos from the event available here.

Video of the ceremony available here:

About the 2021 Prix Voltaire