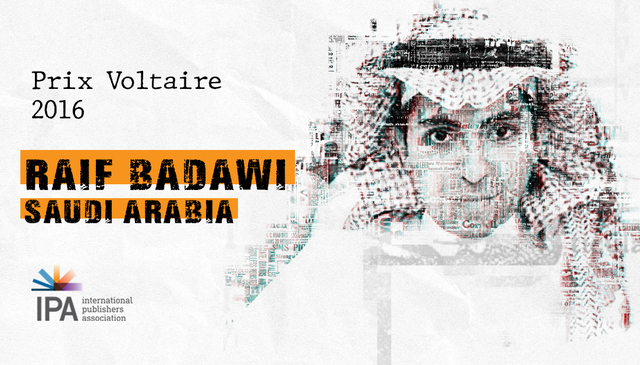 After 10 years of imprisonment, 2016 IPA Prix Voltaire Laureate, blogger, and free speech activist Raif Badawi has been released by the Saudi authorities.

In 2013, Badawi was originally sentenced to 7 years in prison and 600 lashed by a criminal court for having “insulted Islam through electronic channels” and “going beyond the realm of obedience”. The following year, however, an appeals court not only upheld the conviction but also increased his sentence to 10 years in prison and 1000 public lashes. He was also given a fine of 1 million Saudi riyals (264,907 CHF). The first 50 lashes of his sentence, administered on 9 January 2015, led to such international outrage that the authorities postponed subsequent floggings indefinitely.

Badawi was arrested and convicted after he founded Free Saudi Liberals, an online forum and platform intended to facilitate political and religious debate in a state well-known for its repression of freedom of expression. On the forum, Badawi worked to publish his own pro-reform, secular ideas as well as those of other Saudis; however, after his arrest, the forum was ordered to be shut down by a judge.

Upon receiving the first-ever IPA Prix Voltaire (previously the IPA Freedom to Publish prize) in 2016 on her husband’s behalf, Ensaf Haidar Mohammed, Badawi’s wife said: “It’s very touching, and encouraging, to see Raif’s courage being recognized by the international publishing community. We will use this money to keep fighting for my husband’s release and to highlight the cruel suffering of free speech advocates in Saudi Arabia”.

According to recent news reports, both Badawi’s wife and son – both of whom were granted asylum in Canada and subsequently Canadian citizenship – confirmed that his sentence had ended on March 1st, 2022. However, despite this encouraging news, his freedom will remain restricted due to a 10-year travel ban as well as a ban from using any social media for the next 10 years. This, as others such as Amnesty International have noted, is a grave limitation of Badawi’s freedom of expression.

On the news of Badawi’s release from imprisonment, Kristenn Einarsson, Chair of the IPA’s Freedom to Publish Committee said, “It was a great relief when he was released. If there was some degree of decency in the Saudi regime, they should immediately let him be able to join his family abroad.”