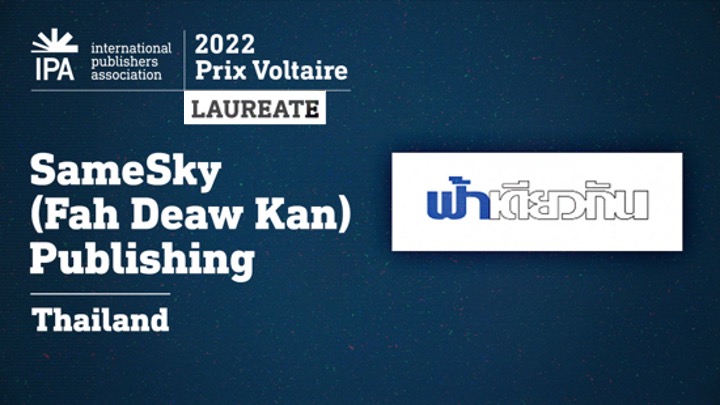 The International Publishers Association’s Freedom to Publish Committee has selected Thai publishing house Same Sky (Fah Deaw Kan) to receive the 2022 IPA Prix Voltaire. The Bangkok-based company was chosen from a shortlist of five nominees, who have all been recognized for their exemplary courage in upholding the freedom to publish and enabling others to exercise their right to freedom of expression.

Same Sky Publishing House was founded in Bangkok, Thailand, in 2002 by three ex-student activists, Thanapol Eawsakul, Thanathorn Juangroongruangkit, and Chaithawat Tulatol. Since then, Samesky Publishing has published a large number of academic journals and books in social science and the humanities, mainly from a critical perspective. Some suggest this critical position has disturbed those who uphold the political and social status quo. The last two decades of volatility in Thai politics has impeded freedom of speech in Thailand, particularly with regards to the abolition of the monarchy – something Same Sky’s work seeks to address. As a result, Eawsakul, Same Sky’s executive editor, has had to endure monitoring by state officials attempting to persecute him for sedition.

Kristenn Einarsson, Chair of the IPA’s Freedom to Publish Committee added: Same Sky Publishing is a perfect example of a publisher demonstrating their bravery by standing up to intimidation and continuing to publish works they believe in.

A representative of Same Sky Publishing will receive the Prix Voltaire in person at 33rd International Publishers Congress in Jakarta, on 11 November.

About the 2022 Prix Voltaire