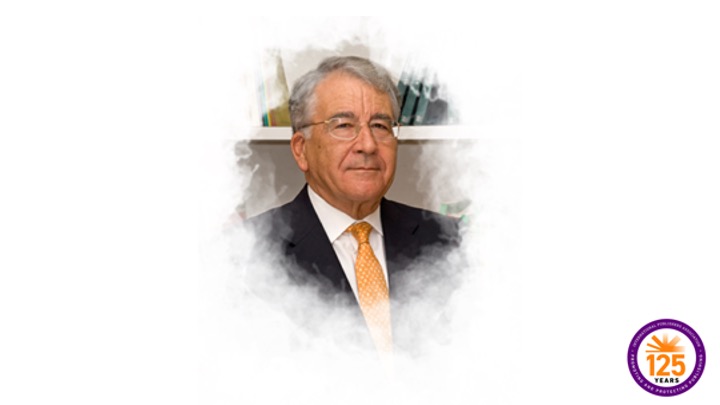 If the IPA did not exist, it would need to be invented

In this second extract of the forthcoming book celebrating 125 years of the International Publishers Association, IPA Past President, Hugo Setzer, looks back at the Presdiency of Pere Vicens (2000-2004).

Many momentous things happened during this particular meeting. A new president was going to be elected, and there were, for the first time in IPA’s history, two candidates for the job. Trade associations would normally agree upon a single candidate for presidential elections, but now the International Committee would have to choose between two candidates.

The results of the presidential election came in: 69 votes in favour of Pere Vicens, 32 for Wulf von Lucius. Pere Vicens would therefore become the 27th IPA president, for a four-year term starting on 1 July 2000.

A couple of months later, in mid-January 2000, Pere Vicens was back in Barcelona, sitting in his office in the tasteful neighbourhood of Sarrià which, with its quiet, narrow streets and small squares, still resembles a village in the midst of one of the largest and busiest cities in Spain. Many famous writers, Mario Vargas Llosa and Gabriel García Márquez among others, lived in the area.

Pere was thinking of the plans he had for the IPA, once he came into office in the summer. He had a very clear idea of IPA’s two pillars—copyright and freedom to publish—but he also had a plan to open up the IPA to new members in other regions of the world. He wanted to harmonize, modernize and enlarge the organisation.

He had had a successful career so far, founding his publishing house in 1961, and working tirelessly through the next 20 years to position his company as one of the leading educational publishers in Spain.

His first encounter with the IPA had been in 1962, when he had attended the 16th IPA Congress, celebrated in Barcelona under the presidency of Santiago Salvat. When he met publishers from all over the world there and heard what was being discussed, he realized the significance of these international meetings and the relevance of a global association such as the IPA.

At that time and throughout the IPA’s history, until the late 1990s, the people who represented their national association at the IPA used to be the owners of large publishing companies. That was about to change.

Pere was looking forward to the upcoming Buenos Aires Congress, which would still be presided over by Alain Gründ.

The 26th International Publishers Congress took place on 1-4 May 2000, in the Argentinean Capital, at the Sheraton Buenos Aires Hotel & Convention Center. Located in the Retiro neighbourhood, with its art galleries and chic cafes, the hotel overlooks the Torre Monumental, a clock tower given to the city by its British community in 1916 to commemorate the centenary of its independence from Spain.

During his opening speech, president Alain Gründ quoted past president Fernando Guedes: ‘If the IPA did not exist, it would need to be invented.’ He went on to say that: ‘publishing has become more international than ever’ and warned that publishing was facing challenges that had never existed before. He correctly identified one of them as the mistaken perception that everything online should be free. And this still remains one of our biggest conundrums today.

Many vividly remembered the speech by Dick Brass, Technology Development vice-president of Microsoft. In a highly controversial speech, he said that publishing would soon become obsolete and that, by the year 2015, there wouldn’t be any more printed editions of newspapers available.

Though contentious, Dick Brass’s speech raised some fundamental questions for the publishing industry, such as: How much print and how much digital content would readers demand in the future? Would print really be dead some day? How to protect copyright in the new digital environment? Would publishers be able to adapt?

One of the things Mr Brass failed to understand at the time was that publishers are not printers. The value we add to the works we publish goes far beyond printing, or nowadays, making them available online.

You can read the first extract here.