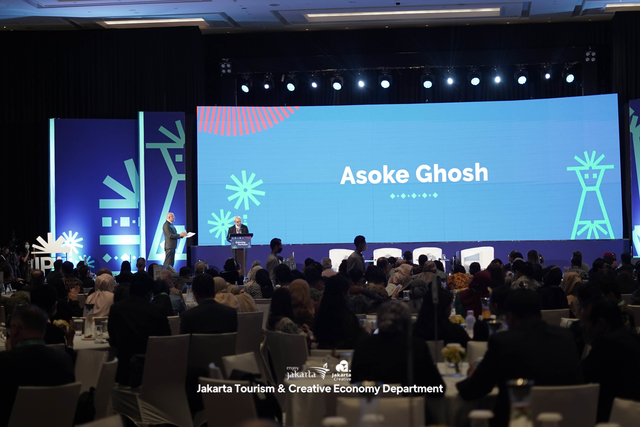 Indian publisher, Asoke Ghosh was awarded the inaugural IPA Champion Award to celebrate his decades of service to the international publishing community to help the IPA achieve its goals on behalf of the publishing industry.

Day one of the 33rd International Publishers Congress included the announcements of two new awards – the IPA Champion and IPA Innovation in Publishing Awards. IPA Past President, Hugo Setzer, who had started the creation of these awards during his Presidency, took to the stage and quoted from his book on the last twenty-five years of IPA: “If Georges Masson and the many other distinguished publishers who founded the IPA 125 years ago were alive today, they would be satisfied and proud to witness what the association they created has become.”

Announcing Asoke Ghosh as the inaugural laureate, Setzer said: Asoke has been strongly involved with the IPA for most of his distinguished publishing career. Mr Ghosh has worked tirelessly, for many years, in promoting and defending IPA’s values and has decisively contributed to build the association we have today.

In 2004 he stood for the position of IPA President. Though he did not win the election, he continued to support the IPA and to uphold copyright and the freedom to publish in different forums. Some years later he served again on the Executive Committee, from 2011 to 2017.

Mr. Ghosh was responsible for bringing the IPA Congress to New Delhi in 1992 and then again in 2018. He has chaired and addressed numerous sessions of the IPA Congresses and served as speaker in IPA Symposia on Copyright and related topics.

Receiving the award Mr. Ghosh said: Out of these 125 years of IPA, I have been involved in IPA for 50 of them. I first met people in 1972 when we founded the Federation of Indian Publishing. I personally think it is a great organization for the publishing fraternity. The people who are running people from that time until now with Bodour and Karine, we are in good hands. I am sure out there among you there a future IPA award winners.

You can watch the ceremony here: