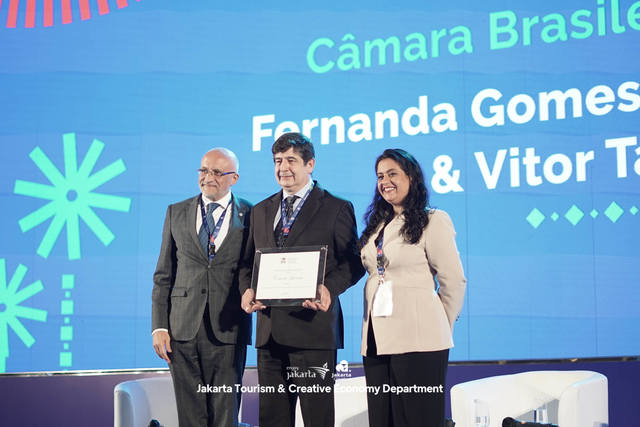 The Brazilian Book Chamber (CBL) was awarded the inaugural IPA Innovation in Publishing Award for its project Conexão Livraria.

Day one of the 33rd International Publishers Congress included the announcements of two new awards – the IPA Champion and IPA Innovation in Publishing Awards. IPA Past President, Hugo Setzer, who had started the creation of these awards during his Presidency, took to the stage and quoted from his book on the last twenty-five years of IPA: “If Georges Masson and the many other distinguished publishers who founded the IPA 125 years ago were alive today, they would be satisfied and proud to witness what the association they created has become.”

Having announced Asoke Ghosh as the inaugural IPA Champion Award, he brought the audience’s attention to the IPA Innovation in Publishing Award noting that innovation is a key element for publishers to remain relevant. Over time, we have been innovative, adapting to change and new technologies.

Conexão Livraria is an ambitious project that sets out to connect independent bookstores with book wholesalers and a technology platform to facilitate the delivery of books to customers in a matter of hours not days. This project was born of the COVID pandemic in Brazil where it soon became obvious that small- and medium-sized bookstores didn’t have the technical or logistical capacity to supply increased demands. Rather than lose customers to online bookshops, Conexão Livraria allowed customers to walk into a bookstore and order books that are not physically in the store, easily and confidently, and receive it in a few hours. This is a game changer for small- and medium-sized bookstores, which are increasingly joining the network.

Receiving the award, Vitor Tavares said: It is a great satisfaction to receive this important award from the IPA. It is the recognition of the importance physical bookstores as disseminators of knowledge through books. We have to strengthen small and medium-sized bookstores in all countries. When a bookstore closes its activities, the lights of knowledge are turned off and the democratic access to books for everyone becomes smaller. Long live bookstores!

You can see the ceremony here: