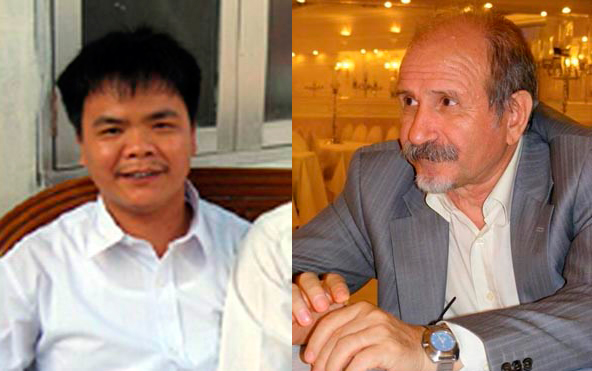 Six publishers have been short-listed for the 2014 IPA Freedom to Publish Prize, which will be awarded during the London Book Fair on April 8th.

The Prize honours a person or an organisation that has made a notable contribution to the defence and promotion of freedom to publish. Reflecting on the large number of nominations that were submitted, IPA Vice-President Richard Charkin commented that it was "good news for the award, bad news for the world".

Today we reveal the first two short-listed nominees: Nguyen Vu Binh of Vietnam and Ilbay Kahraman of Turkey. Both have been harassed and prosecuted for their publications and both have demonstrated great courage in leading the fight for freedom of expression within their countries.

You can read our profile of Nguyen Vu Binh and of Ilbay Kahraman. We'll be revealing two more nominees on Wednesday, and the final two on Friday.

Nguyen Vu Binh is a Vietnamese journalist, writer, blogger and human rights defender. From 1992 to 2001 he worked as a journalist, reporter and editor for the Tap Chi Cong San (Communist Review), the Vietnamese Communist Party’s official publication. In September 2000, he published online an unauthorized article ‘’Vietnam and the Path to National Revival’’ and resigned from his position. Over the next two years, he helped found the Association to Fight Government Officials’ Corruption, published several essays on freedoms rights and democracy, and signed an open letter to Vietnamese Parliament calling for reforms. In July 2002, he sent a written Testimony to the U.S. Congressional Human Rights Caucus in which he discussed the human-rights situation in Vietnam.

On 25 September 2002, he was arrested and held in solitary confinement for 15 months, with neither his family nor his lawyer allowed to visit him. On 31 December 2003, he was sentenced to 7 years’ imprisonment on charges of “espionage’’. He was eventually released in June 2007, but had to serve an additional sentence of probationary detention for three more years.

Committed to the ideals of democracy and freedom of expression, Nguyen Vu Binh has remained in Vietnam where he continues to write despite being subjected to constant harassment and police surveillance. He self-publishes articles online as no licensed Vietnamese publisher is able to publish his work.

In 2002 and 2007 Nguyen Vu Binh was a recipient of Hellman/Hammett Grants, awarded by Human Rights Watch for writers who have been victims of political persecution.

Ilbay Kahraman is the owner of Ayrinti Publishing House, in Istanbul. During the last 25 years, Turkish publisher Ilbay Kahraman has defended freedom of publishing in the face of repeated accusations and court cases, with a number of his publications being subjected to investigation and trials.

He is the publisher of Le Dernier Exile by Dragan Babic, La Philosophie dans le Boudoir by the Marquis de Sade, Snuff and Choke by Chuck Palahniuk, Portnoy’s Complaint by Philip Roth and The Sex Revolts by Simon Reynolds & Joy Press. In each of those cases, the Istanbul Chief Prosecution Office launched an investigation process, alleging that the works were obscene and that they violated public morals and the Turkish Penal Code, and leading to the book’s withdrawal and a court trial.

Despite these repeated accusations and court cases, Ayrinti has continued to publish a wide range of literature on principle and has never given up the fight for freedom of publishing.