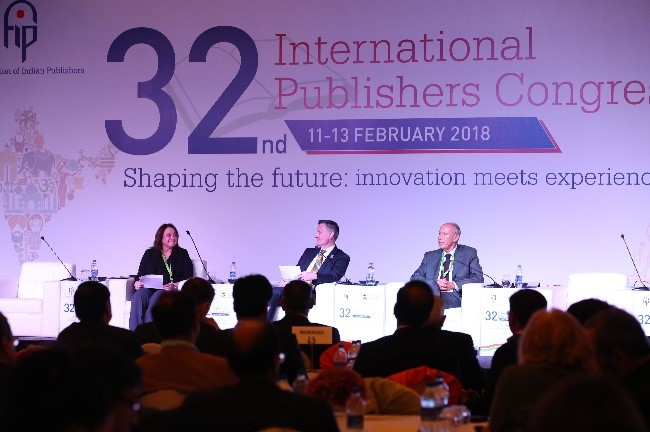 Copyright at the crux of the IPA Congress

One of the most anticipated sessions of the IPA’s Congress was Shaping the Future of Intellectual Property, featuring a conversation between Maria Pallante (President and CEO of the Association of American Publishers) and Francis Gurry (Director General of the World Intellectual Property Organization), and hosted by IPA President Michiel Kolman. Several key questions emerged during this session: “How do we create a functioning global digital marketplace for creative content?” and “How do we bring together traditional publishers and ‘born digital’ platforms, to create that marketplace?”
Changes to laws, regulations and court decisions could be part of the answer to these questions but are highly unpredictable and therefore not favoured by publishers and creators.

The three-way conversation at the congress examined the role that governments and non-governmental organizations play in bringing stakeholders together to work on voluntary measures that honour copyright while still enabling the enormous benefits of global digital delivery. For example, Mr Gurry recognized the important role his institution (WIPO) had to play in encouraging respect for copyright worldwide, but he was clear in saying that platforms that engage in blatant criminal conduct cannot be tolerated. The Director General also noted that, at a time of policy paralysis where the normative or law-making agenda in Geneva was seen by some to be too slow, WIPO had to resort to soft power to influence domestic engagement.

Maria Pallante reminded everyone that publishers are “the original copyright innovators.” She noted that the big tech platforms are certainly part of the disruption and innovation in the current publishing ecosystem, but they are also partners of publishers. While encouraging governments to work together in coordinated fashion to explore normative business practices, for example with respect to ISPs or search engines, she cautioned against broad exceptions to copyright that would override private sector incentives and flexibilities, noting that the freedom to contract was an extremely powerful tool that lets operators come up with innovative, market-specific solutions. You can read Mrs Pallante's prepared remarks here. 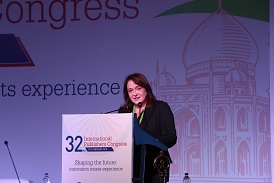 The session speakers looked at how capacity building can lead to increased respect for copyright, because countries that have the infrastructure to support a local publishing industry are more attuned to the benefits of a strong legal system, which can lead to better and more consistent enforcement against infringement.

Dr Kolman asked the thorny question of how to deal with piratical sites that infringe copyright on a global scale but are almost impossible to prosecute because of where they are based. Mr Gurry acknowledged the problem and suggested that the IPA and other stakeholders could use WIPO as a forum to find a solution for specific cases. Ms. Pallante agreed that large scale criminal pirates require a coordination of resources and strategy amongst governments and the affected players.

The session closed with both speakers agreeing that publishing and publishers are here to stay — vital not only to culture but also to educated, stable societies. Publishers just have to embrace change and continue to innovate.

The second day’s session, Responding to Copyright Challenges, gathered together a panel of copyright experts (Rajiv Aggerwal and Pravin Anand from India, Australia’s Louise Adler, and Lui Simpson from the USA) to look at specific national legislation and court cases that have upset the delicate balance once provided by educational exceptions to copyright. 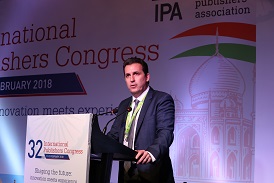 The speakers noted various cases around the world where judges have expanded exceptions with harmful results for publishers, including the abandonment of longstanding license structures. Likewise, where legislators have changed education exceptions (as was the case in Canada in 2012), there has been inadequate consideration of the crucial role that publishers play in producing and delivering high-quality educational resources.

Rajiv Aggerwal, Joint Secretary at the Indian Department for Industrial Policy and Promotion at the Ministry of Commerce and Pravin Anand, Managing Partner at the Indian law firm Anand and Anand, both agreed that publishers need to be more vocal about what they do and how vital publishing is to a knowledge economy. The former underlined the need for younger generations to be aware of intellectual property (IP) and respect both others’ and their own IP. The latter gave a detailed overview of the negative impact of the notorious judgement handed down at the end of the Delhi University case.

Lui Simpson, Vice President, Global Policy, at the Association of American Publishers, argued that passionate advocacy combined with compelling data was required to demonstrate to lawmakers that the short-term budget improvements gained from the degradation of copyright protection does not serve the long-term goal of maintaining a vibrant and successful educational system.

Another theme was collaboration among stakeholders. Louise Adler of Melbourne University Press presented Australia as an example where publishers came together with educators and educational institutions to object to the adoption of an uncertain US-style “fair use” exception and instead agreed on licensing principles that provided reasonable solutions for the benefit of the entire publishing value chain — creators, publishers and users.

(Thanks to Paul Doda for his help summarizing these sessions)