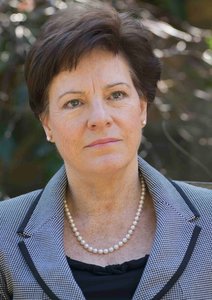 "Copyright has been the bedrock of huge expansion of the creative industries which have taken advantage of technology, new platforms and devices, delivering wider choice to consumers of digital music, newspapers, film, TV and books than ever imaginable even ten years ago."

IPA: What challenges have you experienced in your career and how did you overcome them?

I am somebody who absolutely thrives on challenges. My career as a senior lobbyist for the media industry has in many ways been defined by challenge and change. My early career path was varied, enjoyable but conventional — including working for three trade associations: first for the retail trade; then independent television; and finally the advertising industry. In all three I learnt about government, Brussels and the dark art of lobbying.

Then in 1991, just after having my second child and getting divorced, I took a substantial risk. I left the relative safety of a full-time employment package and accepted the invitation to set up and run the newly founded European Publishers Council (EPC) on a two day a week freelance consultancy contract — no office, no pension, no benefits, and in those days no email or internet. Just a clean sheet of paper and the keen energy of 12 Chairmen and CEOs of Europe’s most powerful press publishers to tackle what we affectionately call ‘Brussels’.

I couldn’t resist the challenge. Not only were the European Commission and Members of the European Parliament of the early 1990s intent on banning or restricting many categories of media advertising, or imposing unreasonable restrictions on how businesses could use personal data, they were also trying to limit cross-media ownership at the very moment when media and telecoms convergence was looking like a reality. But most provocatively, the erstwhile President of the European Commission, Jacques Delors, had declared he would establish ‘new rules of the game’ for Europe’s press. He didn’t succeed, and the EPC has thrived.

For almost 25 years now I have run and helped mould this unique media lobby group. The EPC is not a trade association. It still has no permanent office or employed staff. I am still a freelance consultant with all the attendant challenges. And I still need to fill those new clean sheets of paper with ideas and lobby strategies for 26 of the most powerful media CEOs in Europe.

From the start it was decided that only the Chairman or CEO of a company or group should attend the key meetings of Members, or our high level dinners and meetings with the European Commission President, European Commissioners, Prime Ministers and Members of the European Parliament. This seniority has ensured that the voice of the EPC is authoritative and on occasion, loud!

At the same time, many things have changed since 1991 when the EPC was formed. And as the business of media lobbying has been reinvented, so I have had to change with it. As the EPC grew and, as a freelance I attracted some additional clients, I decided to set up an independent consultancy company called Europe Analytica. Not only has the media and communications industry changed beyond all recognition, but so has the EU institutional playground, where each new twist and turn is played out by the nanosecond on social media. The biggest challenge I have today is to make sure that the values and business priorities of the companies in the EPC determine the regulatory agenda, and that it is not the hunger for content of social media that shapes it. This challenge is perhaps exemplified best in the highly complex, polemical and political battle over the future of copyright.

No longer the arcane preserve of lawyers, copyright in all its glory went mainstream and populist around ten years ago. I wanted the EPC to be at the heart of the debate about its future, not lost in the riptide of a vanishing status quo. The reform of copyright is central to the European Commission’s plans to deliver a unified, Digital Single Market (DSM) across the 28 states of Europe. Copyright has been the bedrock of a huge expansion of the creative industries, which have taken advantage of technology, new platforms and devices, to deliver a wider choice to consumers of digital music, newspapers, film, TV and books than ever imaginable even ten years ago. Without copyrightas the basis of contracts, companies would not have invested in new talent and technology, and authors, artists, musicians, actors, journalists, photographers and other creators would not have been certain of remuneration. Copyright is the bedrock of the technological change we have experienced in the last decade. Yet in spite of this evidence, pressures to bring about ‘radical’ reform of copyright are powerful and insistent. And those who seek to gain from weaker copyright are constantly pitching ‘old’ industries such as publishing, music, TV and film against the ‘new’ tech firms, search engines and big content distribution platforms. Just peek at #copyright or #DSM and you’ll see what I mean.

My challenge has been to find a way to be proactive not defensive, and to look at what publishers and other rightsholders actually need to manage their rights better, to make it easier for users to find out who owns which rights and where to get a license, and to put an end to free riding by other businesses. This set me on a path to promoting innovative technical solutions to the management of rights, going with the grain of technology and machine-to-machine transactions. I looked for allies in the industry, and in the EU institutions, to promote innovation in licensing as an alternative to regulatory ruin through the cutting and slicing of the exclusive rights of both creators and companies.

With some key allies, in 2006 the EPC, together with the World Association of Newspapers and the International Publishers Association developed ACAP, the automated content access protocol — a non-proprietary, global permissions software tool to manage copyright online. It worked and was adopted by over 3,000 publishers worldwide, but the largest free-rider of all, Google, refused to implement it. Next, in October 2010, came the EPC’s Big Idea for the Digital Agenda. Drawing on the Charles Clark’s dictum that ‘the answer to the machine is in the machine,’ and building on the ACAP approach we won support from European Commissioner Neelie Kroes, which led to me founding a multimedia, international alliance called the Linked Content Coalition (LCC) to develop a technical framework to manage copyright seamlessly across the value chain through identifiers and common rights-expression language. Our innovative approach has changed the direction of copyright policy over the past five years, with the LCC oft-quoted as forward-looking and practical in EC policy documents and EP reports. The EPC secured EU co-funding to test the LCC technical framework in the Rights Data Integration Project (running to end 2015). This is proving that innovation and efficiencies in automated licensing work. The UK Copyright Hub indeed has adopted the LCC data model.

The European Commission is due to publish its copyright reform package by the end of 2015. Whilst communications and media continue to face change and risks, they also reveal new opportunities and markets of value and this inspires me to carry on running the EPC. My two children are now grown up embarking on their own careers with families of their own. I remarried when my children were still very young, but juggling a family life with a busy job was often hard, if not exhausting. Yet being a freelance consultant had its benefits too — it gave me the flexibility to manage my time productively and spend precious time with my family, instead of in management meetings. The risk I took all those years ago paid off in so many ways. My continuing challenge is how to ensure that the EPC remains the best media lobby group in Brussels, while enjoying being a young Grandma!

Angela Mills Wade – Executive Director, European Publishers Council and Director, Chairman of Europe Analytica. Angela works with the IPA as part of IPACC (International Publishers Association Copyright Coordination) committee. She is, among other positions, Chairman of the UK’s Publishers Content Forum, Vice Chairman of the News Media Coalition, Chairman of European Steering Group for Self-Regulation of Online Behavioural Advertising, Director of the European Interactive Digital Advertising Alliance, Joint Chair (with the British Library) of the Joint Committee on Legal Deposit and Board member of the Linked Content Coalition. Angela is married with two children.