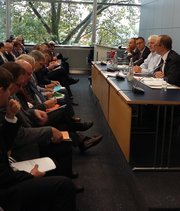 New members and a reinvigorated Executive Committee give the IPA a rare impetus going into 2016.
The IPA General Assembly at the Frankfurt Book Fair on 15 October accepted new members from the following countries: Bangladesh, China, Greece, Jordan and Peru. It also voted to give Full Member status to the associations from the following countries: Saudi Arabia, Slovenia and Tunisia.

IPA President, Richard Charkin, said, ‘I am delighted to welcome these new members to the IPA and to congratulate the members that attained Full Membership. A broadened membership will help our ongoing campaigns for copyright and freedom to publish around the world, and the number and spread of the new applicants is particularly heartening.’

Newly appointed Secretary General, José Borghino, said, ‘This is a dream team of executive committee members: experienced, innovative and immensely well-connected. It will bring stability to the IPA at a time of global change, as well as fresh ideas and a willingness to try new things.’