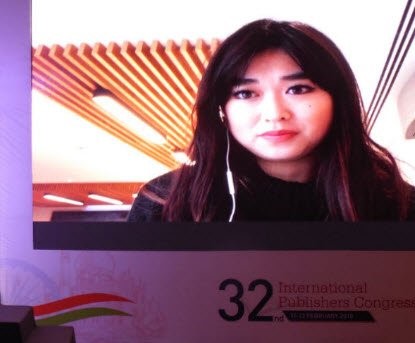 Can awards, such as the IPA’s Prix Voltaire, make a difference to the situation of Freedom to Publish defenders? How can we tackle self-censorship? The sessions answering those questions and the Prix Voltaire award ceremony took congress delegates on an emotional rollercoaster.

The 2018 IPA Prix Voltaire award ceremony closed the second day of the 32nd IPA International Publishers Congress and demonstrated the real-life impact on the families of those who sacrifice their freedom to promote the words of others.

Angela Gui, daughter of 2018 IPA Prix Voltaire recipient Gui Mihai, received the award on behalf of her father via Skype and delivered a moving speech which you can read and see in its entirety here. Drawing on her memories of her father and her most recent conversations with him, she evoked Voltaire himself: "I think that my father's version of optimism is perhaps precisely the kind that Voltaire describes. It's an optimism that in the face of unimaginable cruelty still believes in change. And it's an optimism that isn't crushed by lies, force and humiliation."

Two posthumous Special Awards were also announced on the night, for Chinese author, Liu Xiaobo and Bangladeshi Publisher Faisal Arefin Dipan. Mr Dipan’s widow, Razia Rahman Jolly, told the audience, "We have sacrificed our sunshine. We are in darkness," but she vowed to continue her husband's work and keep publishing books in Bangladesh. You can see Mrs Jolly's speech here.

The delegates rose to standing ovations for both Ms Gui and Ms Jolly.

The powerful speeches that accompanied the awards that night left no-one in doubt as to the answer to the question discussed by the first Freedom to Publish session of the IPA Congress the day before: Do Awards and Recognition Help?

That session opened with a compelling keynote from Jennifer Clement, President of PEN International. She reminded the delegates how global the challenges to freedom of expression are, and how many writers are affected. To that, she added the lack of recognition for female writers, citing PEN’s Women’s Manifesto, and asked the audience to think – if prizes protect recipients, are women being ignored and thus denied that protection? You can read Jennifer Clement’s speech in full here (also available in German here).

Angela Gui then joined the panel via Skype. She shared the latest news of her father Gui Minhai’s detention in China and also her belief that he would welcome the IPA Prix Voltaire, contrary to reports prior to the Congress. She was open about the internal struggle she had faced initially, following her father’s arrest in 2015, over how best to proceed and that she was now convinced that vocal support from the world community was better than silence if her father's situation is to improve.

This sentiment was echoed by Cavit Nacitarhan and Elif Günay, representing the Turkish recipients of the 2017 IPA Prix Voltaire, who reminded the audience of the 150 writers and publishers currently jailed in Turkey and the importance of continued international attention. As he announced his decision to start publishing again, Mr Nacitarhan made a direct appeal to publishers everywhere to support their Turkish colleagues who have borne the brunt of his country’s repressive regime.

The second day’s session, The threat of self-censorship in publishing kicked off with Kristenn Einarsson, CEO of the Norwegian Publishers Association and Chair of the IPA’s Freedom to Publish Committee, introducing the session re-iterating that freedom to publish means that publishers must be allowed to publish all that they deem worthy of publication, even, and perhaps especially, if those works challenge the boundaries established by the society they operate in. As the French Enlightenment philosopher and writer Voltaire is often credited with saying: ‘I disapprove of what you say, but I will defend to the death your right to say it.’

He was followed by a video address from Norwegian publisher of Salman Rushdie’s The Satanic Verses, William Nygaard, where he noted the immense pressure on publishing coming from government, libel laws and extremism. He recognised fear as a reason for self-censorship and closed with the notion that self-censorship is, in fact, a lack of leadership.

Jürgen Boos, President and CEO of the Frankfurt Book Fair, noted that censorship can come in many forms, even in the translation of the title of a book. He too faced calls for certain publshers to be denied stands at the Frankfurt Book Fair but stated that, although he doesn't agree with the right-wing publishers in question, he could not exclude them if they had not committed a crime.

Trasvin Jittidecharak, founder of Thailand’s Silkworm Books and member of the IPA’s Freedom to Publish Committee, spoke of how difficult it can be for authors and publishers in some countries to even realise that they are self-censoring. Each regime threatens its people in different ways and those people handle their situation differently. She added: “Letting self-censorship become the norm is just letting an illness turn into a chronic disease. It will slowly kill us. The worst thing that happens is when we see another human being punished for no real reason, yet we fail to speak up, let alone right the wrong.”