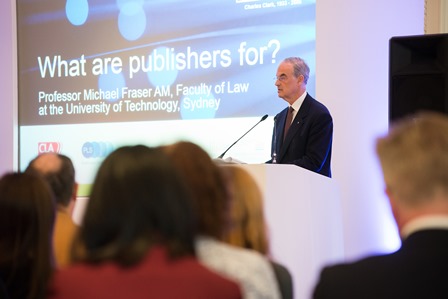 In 1985, Professor Michael Fraser entered the complex world of copyright by accident. Having casually responded to a job ad in the Sydney Morning Herald (and having got the job as 'the only applicant wearing a tie'), the young Michael Fraser's career began with a three-week investigation into the growing problem of photocopying, for the Australian Copyright Council.

Having completed that task, he went on to found and then lead the Australian Copyright Agency Limited (CAL) for 21 years, and set up and direct other Australian, foreign and international copyright related bodies.

Today, he is Professor of Law at the University of Technology Sydney, Chairman of the Australian Copyright Council, Chairman of the Stolen Generations Testimonies Foundation and Director of the Dictionary of Sydney Trust.

His stature as a world copyright authority is one reason why he was asked to give this year's Charles Clark Memorial Lecture, on 13 April, during the London Book Fair, to a specialist audience of publishers, lawyers and book people.

With the back-to-basics title What are publishers for?, the speech was eloquent, heartfelt and insightful. Notably, it delivered a no-nonsense diagnosis of the copyright challenges that modern publishers are facing, particularly from large technology companies. The message was clear: if publishers are to weather the storm currently rattling their copyright cosmos, they must seize the initiative today.

To some copyright watchers the lecture was an inspiration; others have dismissed it as a minority view. But continuing interest in the man and his ideas, at a time when Australian publishing has been thrown into turmoil by a draft report by the country's Productivity Commission, prompted the IPA to dig deeper.

What is your response to the Australian Productivity Commission draft report?

It's an economist's view and doesn't get to grips with the purpose of copyright; they suggest reducing the copyright period to 15 or 25 years from the death of the author. If we want to attract professional, dedicated investment of time and capital into creating original works then we have to reward those who create and produce the work.

It's completely unrealistic to expect there to be investment by talented and dedicated people with such a short term of copyright. It betrays a misunderstanding of copyright, and what species of intellectual property it actually is.

It's ludicrous to think that Australia could have – as a matter of pragmatic realpolitik and promotional necessity – a term that's different from our major trading partners, the US, the UK and the whole of Europe. It's just an absurd notion; it would cause so much disruption as to be totally unworkable in practice.

(Note: since the time of writing, the Australian government has echoed this reasoning.)

"There are powerful social forces at work mounting an assault on copyright ... and they clothe that attack in libertarian rhetoric."

What is behind this global misunderstanding of copyright?

One factor is a lack of respect for works of the mind. People aren't taught in kindergarten and school to respect and value their own creativity and so they don't respect other people's creativity either.

I also think there are powerful social forces at work mounting an assault on copyright; authoritarian forces, which attack human rights, including copyright, and they clothe that attack in libertarian rhetoric. Large corporations and extreme, authoritarian parties are attacking copyright because it is a pillar of freedom of expression. The Pirate Party and other so-called "libertarian" parties are opposed to copyright because they have a reflex against individual autonomous creative expression and diversity. And I think that is a real battle in our community at the moment; there's a lot of complacent thinking of all colours, to the right and left of the political spectrum, but copyright is the foundation for individual, independent, autonomous freedom of expression. Without copyright you can't run democracy.

Are the technology companies just commercial opportunists, or is there more to it?

They are the largest and wealthiest corporations in the history of the world; they're driven by commercial interests, as all corporations are, but they pretend that their corporate interests are to be equated with the public interest.

Google and Facebook provide marvellous services, and consumers are attracted to them because they provide great value. But when they try to control ownership of IP and copyright in particular – and we see Google Books turning copyright on its head – when they try to own and manage our private, personal and sensitive information, from which they make billions of dollars without, in my view, properly informed consent, control or agency of their individual customers, then I think that's a threat to our individual liberty and it diminishes us as citizens. It diminishes us to the level of consumers being farmed by Google and social media.

"When they try to own and manage our private, personal and sensitive information...it diminishes us as citizens."

During the post-speech Q&A in London, you said Gold Open Access was 'wrong'. What did you mean?

It's wrong to ask authors to pay for their work to be published as the foundation of a business model. That, again, is turning copyright on its head and setting one author against another in order to try to get themselves published; they have to pay, and probably pay more and more. When you combine that with the Academy's model of 'publish or perish', I think it's unfairly exploitative.

Authors and publishers ought to be respected for their work and paid for their work, just like anybody else in the community. They ought not to have to pay for the privilege of publishing their work.

I think it's unsustainable because there's no ROI, there's no business model that rewards investment. The academics depend on the patronage of the university or, sometimes the university library's budget. University policy and funding policy change all the time, and when Open Access goes out of fashion then it will be defunded and it has no other sustainability than that line of funding. Publishing ought not to depend on patronage in any case; it ought to operate in a market place of ideas so that creators can get rewarded in proportion to the use of their works.

Isn't prestige the return on investment for academics?

That's true, but it seems to me that it returns to a kind of 17th century system of grace and favour and patronage. It gives you the independence and prestige of having been published, and that prestige is a currency that operates in the Academy. But in order to realise that capital of prestige, it has to be valued by an institution, and therefore its value is, to the extent that it curries favour with a patron, a fetter on freedom of expression, on diversity of views. People will publish what will gain them grace and favour from the Academy, or from the State, or from whoever will realise the value of that prestige.

This month the IPA made several interventions during WIPO's 32nd SCCR (copyright) meeting, including on cross-border educational exceptions. What's your opinion on this issue?

Rights management organizations have to federate and interoperate more closely; we have to adopt interoperable metadata. In the Charles Clark Memorial Lecture I proposed there should be a copyright registry, and it should be actionable so that you could use it not only to transact rights but to access content with the rights in one seamless transaction. I think if you do have federated rights organizations and mirror sites across publishers sites, you won't need to have these kinds of statutory licences and exceptions.

Would WIPO be your choice to run such a registry?

If publishers don't do it, WIPO could do it the same way they run the patent registry. But if publishers want to seize that position which Google has now seized, proximate to the consumer, and be able to manage prices and terms and conditions, the way Google dictates to the consumer and to the publisher now, then publishers themselves should invest in this interoperable architecture.

This is what fast moving consumer goods did with the development of supermarkets. It's just a supply chain management issue, and just as we developed barcodes to move that supply chain, in the same way we should develop the metadata to make content available from publishers' own sites into a federated, virtual registry that consumers can access seamlessly from anywhere and transact content and rights either individually or on a subscription basis, across all the publishers' works.

Publishers should seize the initiative to do that.