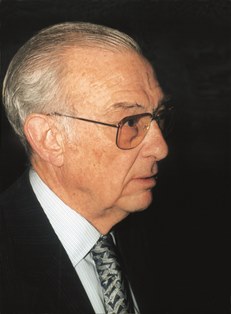 Mr Guedes, who led the IPA from 1992 to 1996 and remained a lifetime Honorary Member, wrote and published an official history of the Association, called International Publishers Association. The First Century, (pictured below) in the final year of his presidency.

Born in 1929 in Porto, Portugal, Fernando Guedes devoted his life to literature, art criticism, history of culture and publishing. In 1958 he founded Verbo Publishing, which he directed until November 2009.

In Portugal, Fernando Guedes was president of the National Publishers and Booksellers Guild (1969-1972) and the Associação Portuguesa de Editores e Livreiros (Portuguese Association of Publishers and Booksellers) (1983-1987). In addition, he sat on the High Council of the Portuguese Catholic University and was a member of the same university’s Scientific Society, as well as serving as an academic at the National Academy of Fine Arts and the Portuguese Academy of History. 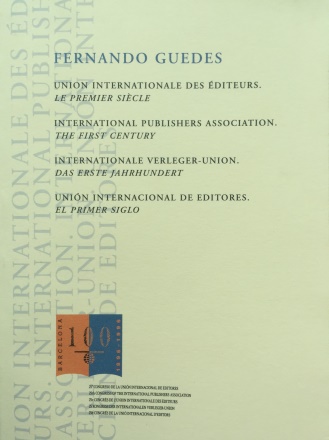 Internationally, he was the last president of the Groupement des Editeurs de Livres de la Communauté (1988-1990), the Book Publishers Group of the European Communities — GELC; a founder of the Federation of European Publishers (FEP); and a consultant to the EEC and UNESCO. He received several national literary prizes as a poet and writer in Portugal, and was variously decorated for his work by Portugal, the Holy See and France.

In a message of condolence to Mr Guedes’ son, João Miguel Guedes—who is also a publisher and former delegate to the FEP—the current FEP president Henrique Mota wrote: ‘Fernando Guedes was an example to all of us, as a publisher and as a dedicated member of the community, through his multiple commitments with our trade associations. FEP will remember how your father as president of the then GELC worked to set up FEP as a modern organization representing the interests of publishers at a European level. I am very proud to be one of his successors in this endeavour, and I will never forget his friendship and the great human testimony that he left us all.’

For his more than 50-year career, Fernando Guedes shaped Portugal’s cultural and literary scene, both through his unique contribution as a publisher and through works he personally authored in the fields of poetry, criticism, art history and cultural history.