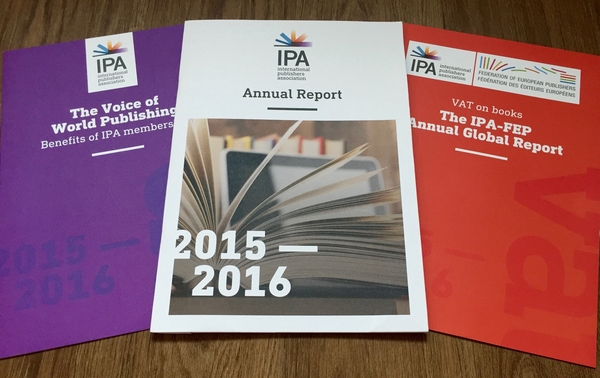 The IPA annual report was presented to the General Assembly this week in Frankfurt. This year’s report is more compact than in previous years, and covers the key aspects of the IPA’s work over the period between October 2015 and October 2016, such as Freedom to Publish, Copyright, Educational Publishing, Literacy, and Accessibility.

It also includes three pages taking a selective look at selective global publishing industry statistics, including the evolving revenues in 17 markets, numbers of new titles produced and number of titles per million inhabitants.

The 2016 annual report also came with two separate pull-outs, namely, The Voice Of World Publishing, a four page leaflet detailing the benefits of IPA membership, including access to the Association’s work to defend and promote copyright and freedom to publish worldwide.

Inserted into the back cover is the IPA-FEP joint annual Global Report on VAT on Books, which lists the different levels of VAT applied to print and e-books in 103 countries, and sets out the IPA’s firm conviction that books should be exempt from VAT.