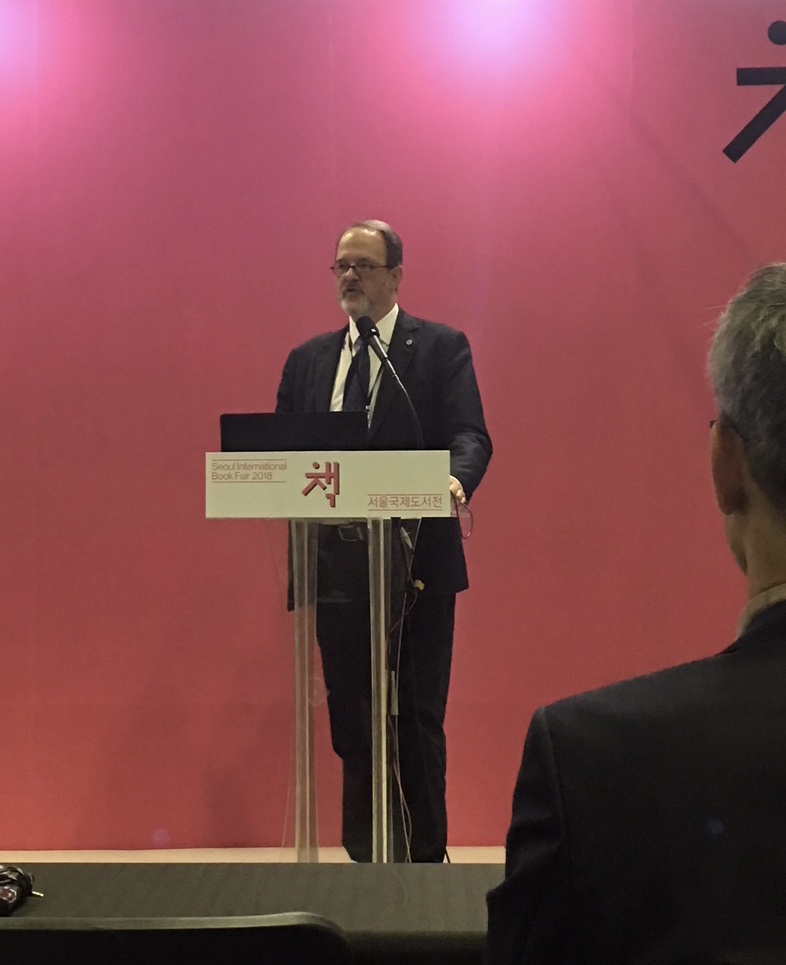 Given the outstanding reputation that Korea has in the field of education, it came as a surprise when the KPA came to a recent meeting of the IPA’s Educational Publishers Forum and asked for advice and assistance in dealing with potential changes to government policy and activity that would have a deleterious effect on the Korean educational publishing industry. The KPA offered to organise an international conference to coincide with its annual book fair and the EPF decided to send a high-powered delegation consisting of Wilmar Diepgrond (Chair of the EPF), Jaume Vicens (Vice Chair, EPF) and José Borghino (IPA Secretary General).

The IPA delegation delivered presentations which began by detailing the global position of educational publishing and then drilled down into the European and Latin American markets. Educational publishing is profoundly local and the IPA team stressed the need for the government in each country to work closely with its publishers, treating them as stakeholders in the strategically critical process of turning out educated, creative and civilized citizens. Too often, governments treat publishers as mere providers of commodities.

On the perennial question of digital versus hard copy, the IPA team stated the EPF’s position that educational publishers are agnostic about the delivery mechanisms for their works — they are instead focused on translating government curricula into resources that teachers can use. Consequently, educational publishers are focused on what works in a classroom, producing blended or hybrid materials that are flexible and efficient and bring out the best in students.
The 3-hour seminar concluded with a discussion between the IPA team and three Korean experts, plus questions from the audience.

The other international conference focused on copyright and featured Caroline Morgan (CEO of the International Federation of Reproduction Rights Organisations), Sarah Faulder (Chief Executive of the Publishers Licensing Services) and José Borghino. This session also featured presentations that ranged from the global to the local, with Secretary General Borghino looking at ‘The Good, the Bad and the Ugly’ of copyright practice around the world. Like its educational version, this panel ended with a discussion with Korean copyright experts.

All in all, much was learned on both sides and the IPA has confirmed its commitment to continue working with the KPA to improve its copyright laws especially in the field of education.