From mass campaigning in the EU to open consultations in Australia, South Africa and Thailand, as well as the ongoing review in Canada, copyright debates continue to rage around the world. Read more.

The biggest copyright news this month came in Europe. Following our update in last month’s newsletter, the European Parliament plenary rejected the draft report adopted by the Legal Affairs committee (JURI). This interview with Börsenverein’s Jessica Sänger gives an idea of what was in the draft. You can read FEP’s reaction to the vote here. 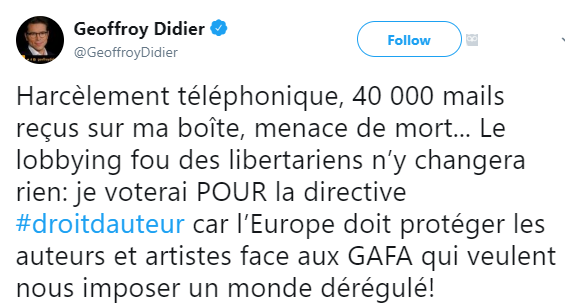 French MEP, Geoffroy Didier tweeted: “Harassment by telephone, 40 000 emails, death threats.
The crazy lobbying of the free-internet brigade won’t change anything.
I will vote for the #copyright Directive because Europe must project its authors and artists from GAFA who want to impose an unregulated world.”

Other than the rejection of the draft, the big news from the vote was the massive campaign over two articles (SaveTheLink and SaveYourInternet) which resulted in Members of the European Parliament receiving thousands of phone calls and tens of thousands of emails, as well as creating Wikipedia blackouts in a number of EU Member States. The level and intensity of lobbying was unprecedented and there are many question marks over those behind these ‘grassroots’ campaigns and the manipulation of the tools by bots.

The European Parliament plenary will now consider amendments to the text and vote again on 12 September. Expect more heavy lobbying from Big Tech’s army of bots.

Outside of the EU, IPA has submitted its comments to the copyright review in Australia and South Africa. You can read those here and here. Our South African member has a useful page on the progress of the Copyright Amendment Bill in that country where you can download their submissions.

IPA has also submitted comments in Thailand where the implementation of the Marrakesh Treaty has begun but, as we have seen in other countries, risks extending exceptions beyond the carefully negotiated boundaries of Marrakesh.

And the Canadian Copyright review continues to rumble on. The Association of Canadian Publishers, one of IPA’s three members in Canada submitted its comments to the review and Hugh Stephens continues to be vigilant in how the creative industries testimonies are covered. Meanwhile, Access Copyright has filed a counter-suit in its court battle to keep the fees it legitimately gathered on behalf of creators and rightsholders from 2010 to 2012.

IPA is sending a senior delegation to Ottawa in September to support our local members and to impress upon the Canadian government the long-term damage caused by its amendment of Canadian copyright law in 2012.