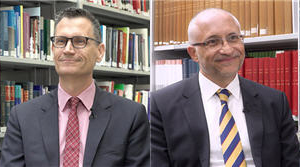 IPA’s President, Michiel Kolman and Vice President, Hugo Setzer feature in two short and snappy videos published by WIPO earlier this month. They promote WIPO’s Marrakesh Treaty and the work of the Accessible Books Consortium (ABC). The IPA, along with other stakeholders, sits on the board of ABC.

First up, Michiel Kolman welcomed the Marrakesh Treaty for jumpstarting access to content for visually impaired persons and spoke about the importance of the Accessible Books Consortium to follow up on Marrakesh and actually make more publications accessible. He recongised the hesitation some publishers may have but underlined the experience of Elsevier where the investments were minimal and the risks to revenue non-existent.

Then Hugo Setzer (in Spanish with English subtitles) called on colleagues from the publishing industry to start working with the ABC and making publications available in accessible formats. He also underlined the IPA’s support for the Marrakesh Treaty and how ABC is a key part of its implementation.

You can read more about ABC here.