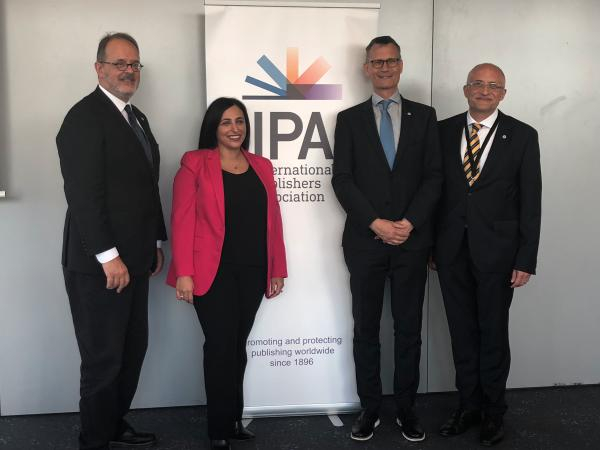 Hugo Setzer and Bodour Al Qasimi were confirmed today as the future President and Vice President of the International Publishers Association at the organisation’s General Assembly in Frankfurt. The pair will take up their new positions on 1st January 2019.

Michiel Kolman, outgoing IPA President, said: The election of Hugo Setzer and Bodour Al Qasimi as President and Vice President of the IPA is great news for the future of IPA. These are two people from different regions with great experience of the industry as publishers and within national, regional and international associations. Their commitment to IPA’s pillars, Freedom to Publish and Copyright, have been proven again and again. It is important that IPA’s leaders will now be gender balanced and show off the diversity of our organisation.

Hugo Setzer, IPA President-elect said: It is a great privilege for me to be elected as President of the International Publishers Association. We work to make a better world by bringing the creations of countless authors to as many readers as possible. We entertain, we educate, we bring curated scientific information to those who need it. It is my mission to make sure IPA brings that message to policy makers worldwide.

Bodour Al Qasimi, IPA Vice President-elect added: I have never been more hopeful about our industry than I am today and what can be achieve together with IPA member support tomorrow. There are emerging industry issues that need to be addressed, freedom to publish injustices that deserve our collective attention, and publishers requiring our support to uphold their intellectual property rights. Progress can’t happen without you, and I look forward to discussing how we can work together to move the IPA and the publishing industry forward.