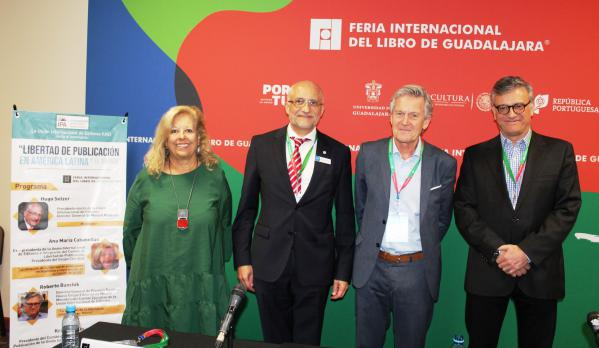 Freedom to Publish in the Spotlight in Guadalajara

With more than 2,000 publishing houses from almost 50 counties exhibiting and an attendance of over 20,000 trade professionals and 800,000 visitors, the Guadalajara Book Fair has positioned itself as arguably the most important book fair for Spanish-language publishing. IPA has been increasing its presence over the past few years and we held a number of interesting events there this year.

Hugo Setzer and Kristenn Einarsson participated at the meeting of the Ibero-American Publishers Group, GIE, and spoke about IPA’s activities and invited all to the International Publishers Congress 2020 which will take place in Lillehammer, Norway.

Hugo participated in a seminar organized by the collective management organisations CeMPro and IFRRO about the balance between copyright and the right to access information. Hugo argued that these two rights are not really opposed, but that copyright is a prerequisite for the creation of valuable information before anyone can have access to it.

With the help of GIE and the Mexican Publishers Association, CANIEM, IPA organised an Educational Publishers Forum meeting for Latin America. Under the chairmanship of Jorge Muñoz from Chile, we heard extremely interesting presentations about freedom to publish in education and the risk of government interference, the value of educational publishers for 21st Century education, new educational materials, and innovative marketing systems.

As part of IPA’s ongoing work to promote the freedom to publish on the international stage , IPA organised a freedom to publish seminar at the Guadalajara Book Fair for the first time. In a packed room, Hugo Setzer, Kristenn Einarsson, Ana María Cabanellas and Roberto Banchik spoke about IPA’s goals, the situation of freedom to publish in the Latin American region, the work of the IPA’s Freedom to Publish Committee and the importance of the Prix Voltaire.