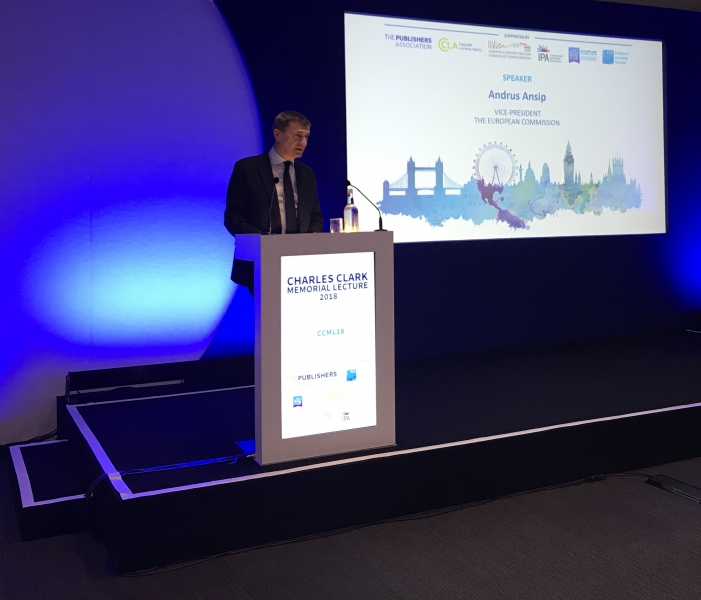 With draft European Union copyright rules currently under debate, European Commission Vice President, Andrus Ansip, came to the London Book Fair to share the logic behind the proposals and came away impressed by what he saw at the fair.

Before delivering his speech, the Commission Vice-President, a former Prime Minister of Estonia, was given a tour of the London Book Fair to demonstrate the work of publishers and how they use technology.

The title of his lecture, The Politics of Knowledge, was borrowed from Charles Clark himself and as the UK PA’s William Bowes pointed out in his introductory remarks, given that “Copyright is now being seen and discussed as something that effects not just our economy but our democracy and our society”, it made sense to focus on the link between politics, copyright and policy making.

Vice-President Ansip gave a broad presentation of the different elements of the European Commission’s Copyright Directive proposal underlining that “Publishers have to take many risks – starting with the courage of believing in the potential of an author – before making an initial investment. That willingness to take risks deserves to be rewarded.”

“It is why we need fair and clear rules for everyone involved across the publishing value chain. This includes digital platforms. They have responsibilities to contribute back into that value chain. They should also be more active in fighting piracy and illegal material posted online.

“As publishers, you need better leverage to improve your negotiations with them.”

The Vice-President went on to talk about exceptions for education and text and data mining as well as VAT on e-books.