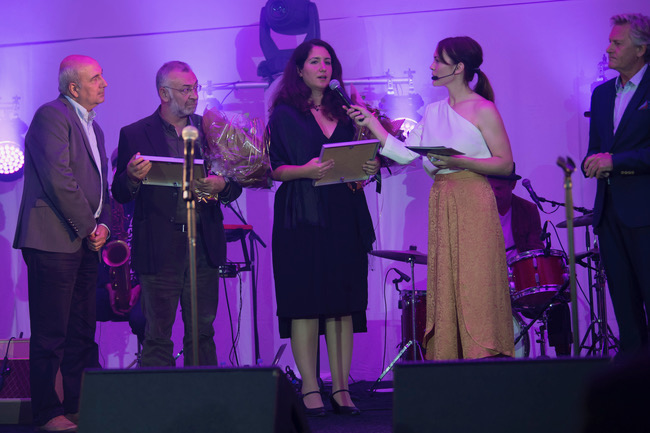 Accepting the award on behalf of her father before 500 publishing professionals and international media at a special gala ceremony, Elif Günay said ‘My father could not be here tonight because he is banned from leaving the country. He’s being punished by the oppressive regime in his own country simply for doing his job, like so many others in his profession. Being recognized internationally for the same reason is truly tremendous. I thank the IPA for recognizing my father's struggle and for giving the situation in Turkey due International focus.’

Speaking through an interpreter, Evrensel Publishing House’s Editor in Chief Cavit Nacitarhan told the audience: ‘We have always known how difficult it is to spread the truth in a country like ours, where the state holds a great grudge and rage against writers, journalists and publishers. Evrensel has been standing against this rage, struggling for the truth of this country, and publishing for better days from its beginning, for almost 30 years now. For my colleagues, and all journalists and writers in jail, I thank the IPA for this prize which encourages us to keep publishing, showing such a great solidarity and support.’

The award was presented by Norwegian publisher Kristenn Einarsson, who is Secretary General of the Norwegian Publishers Association and chair of the IPA Freedom to Publish Committee, the body that selects the Prix Voltaire’s recipient.

He said: ‘The Committee wanted to honour the courage of Turkish publishers who pursue their right to publish despite very real risks to their wellbeing and their freedom. The IPA Freedom to Publish Committee, with our partner NGOs, will continue to monitor developments in Turkey, and work with  Turhan, Elif, and Cavit to continue to raise awareness of the deteriorating free expression landscape in a country is not long the beacon of democratic progress it once was.’

The 2017 IPA Prix Voltaire’s return to the Göteborg comes 11 years after the first ‘IPA Freedom Prize’ was awarded there to Iranian publisher Shalah Lahiji, in September 2006. The prize returned to its origins following a proposal from the book fair’s organizers, who wanted to involve the IPA in the fair’s renowned freedom of expression agenda. An additional element of this was a Freedom to Publish seminar on 29 September, where Elif Günay and Cavit Nacitarhan detailed the immense challenges faced by Turkish writers, publishers and intellectuals in the wake of the failed military coup of July 2016.