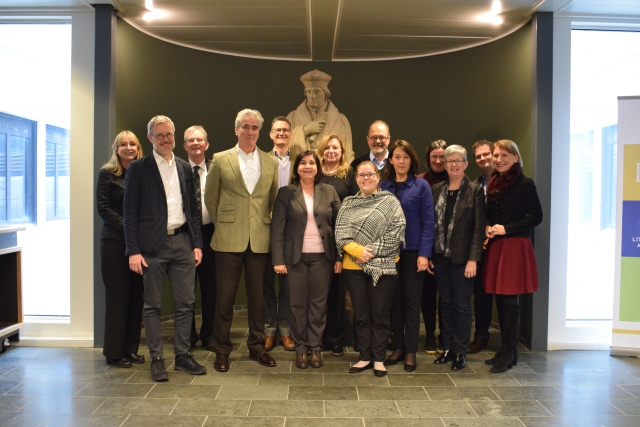 IPA met with representatives of a number of organisations to discuss ways of collaborating on Freedom to Publish and gathering publishing statistics.

IFLA came to this meeting with a very senior delegation: its current and incoming president, the treasurer as well as the secretary-general. The meeting had been called by their senior management in response to the findings of its Global Vision paper — a survey of thousands of librarians around the world that took place in stages over the past two years. One of the findings of that survey was that librarians wanted more collaboration across the sector: hence this high-level gathering at IFLA HQ.

The discussions were greatly facilitated by a decision early on to put copyright to one side for the duration of the two-day meeting — in essence, agreeing to disagree on the attending organisations’ various approaches to copyright. This decision allowed us to talk more easily about the issues where we could agree to work together, and a number of possible outcomes emerged.

Firstly, all of us agreed that Intellectual Freedom and in particular Freedom of Expression was a basic tenet of any possible joint position that we might sign onto. The IPA wholeheartedly supported this as Freedom to Publish is one of our two main policy drivers. The group noted the proliferation of threats in this area: from the familiar (State censorship, religious fanaticism, self-censorship) to the more recent (algorithmic control and censorship by Big Tech platforms for commercial or other reasons). The group agreed to formulate a joint statement that we would champion Intellectual Freedom and Freedom of Expression.

Secondly, we agreed that the rapid changes in the book sector required better ways of gathering information about book production, especially in less developed countries. The IPA has been promoting the need for more and better data in this field for a number of years, so we were enthusiastic about pursuing this course of action.

Finally, we agreed to continue the conversation about collaboration. The next opportunity will be at the IFLA annual general meeting in August. We will keep members informed of further developments.