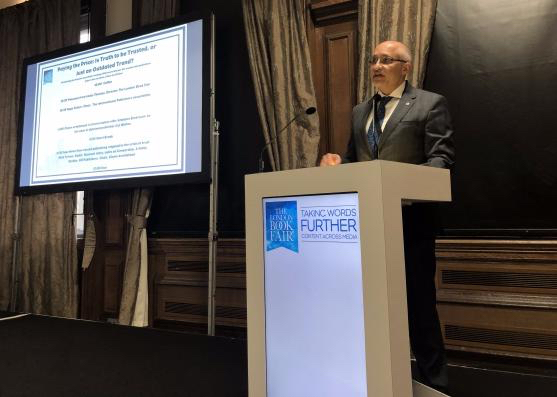 Freedom to Publish at London Book Fair – Telling the truth

The IPA’s 2ndFreedom to Publish Seminar took place at London Book Fair on 12 March 2019. An enthralled audience listened to the latest developments in the case of Gui Minhai and of the courage of publishers in ensuring readers have a reliable place to go for the truth.

Jacks Thomas, Director of the London Book Fair opened the seminar by recalling how those in the West must not take for granted the freedoms they have. IPA President, Hugo Setzer, delivered his keynote, underlining the terrible price that some pay for publishing the truth. Sometimes they pay by being silenced. Sometimes they pay with their lives.

He went on to underline the responsibility that publishers have borne for centuries in ensuring the reliability of what they publish. He contrasted this with the modern-day Big Tech platforms whose business models are built on not being responsible for any of their content.

With the opening speeches concluded, the Chair of IPA’s Freedom to Publish Committee, Kristenn Einarsson, stood in for Angela Gui (daughter of the 2018 Prix Voltaire laureate, Gui Minhai), who was unable to attend. Mr Einarsson updated the audience on the Gui Minhai case, the revelations of Angela Gui’s meeting with Chinese businessmen in Stockholm in February, and on the IPA’s work on the Freedom to Publish in general.

Claire Armitstead, Culture Editor at The Guardian, then moderated a discussion between Jodie Ginsberg of Index on Censorship , Nicky Stubbs from NB Publishers in South Africa, and Nick Tyrone from Radix about how challenging it is to get the truth out.

Nicky Stubbs presented an excellent case study in what publishers actually do to get a book into the hands of readers by speaking about Jacques Pauw’s The President’s Keepers. Now an award-winning bestseller, the editing of and launch preparations for the book had to be conducted in utmost secrecy, with lawyers spending months going through the text to ensure there were no slips that could leave an opening for an injunction against its publication. Bookshops trusted the publisher to leave shelf space open knowing almost nothing about the book, not even its author. The South African revenue and security services tried to threaten the author and publisher into silence. Confident their text was watertight, the publisher stood firm. The book flew off the shelves and the beginning of the end of the Zuma regime had begun.

Jodie Ginsberg applauded the work of NB Publishers and noted that the publishing and press industries need to do more to show readers why they are reliable. They need to show how they verify their information and so clearly differentiate themselves from sites that look official on the surface but do not have the same high standards.