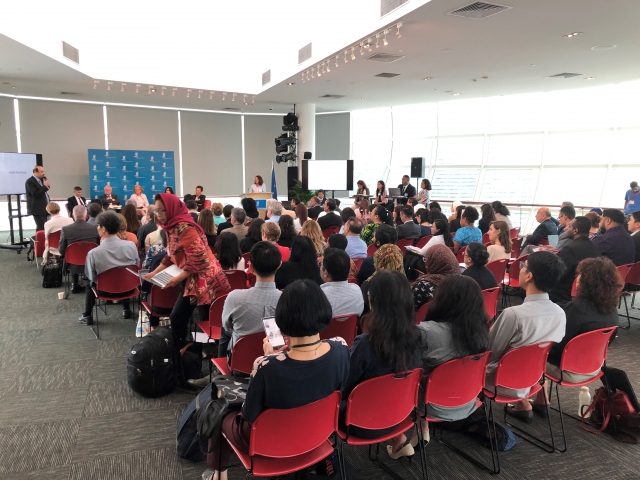 At the end of April, IPA Secretary General, José Borghino, led a strong team of publishers from the Asia-Pacific region at the first World Intellectual Property Organisation (WIPO) regional seminar in Singapore.

As previously reported, WIPO is organizing a series of three seminars during 2019 to facilitate discussions by WIPO Member States of the current exceptions and limitations agenda of its Standing Committee on Copyright and Related Rights (SCCR). IPA and local publishers are invited to these seminars as observers.

For many years, various Member States in WIPO have been pushing for an international treaty to broaden copyright exceptions and limitations for education, archives and libraries. The IPA and other rightsholder groups have been arguing that such a treaty would seriously undermine publishers’ business models, especially in educational publishing. Moreover, we point out that a global, one-size-fits-all treaty is unnecessary because every country already has the ability to enact their own, local exceptions and limitations and that these would be much more effective and efficient as they would be tailored to local conditions.

The two-day Singapore agenda began with introductory briefings from researchers who regularly report to SCCR meetings in Geneva. Delegates from Members States’ IP offices were then split into four sub-regional groups: Pacific Islands; ASEAN (including China); South Asia; and West Asia. These arrangements reflected WIPO’s desire to elicit more nuanced discussions, as Member States delegates were asked to explore the extent to which exceptions and limitations in education, archives and libraries were already operating in their jurisdictions.

Many Member States called for international legal instruments to address cross border issues, not necessarily a treaty, while a substantial number of countries would prefer to focus on legislative assistance at the national level

Publishers participated constructively in the discussions, demonstrating how they respond to market needs through widely available licensing and commercial solutions.

It remains to be seen how the other two regional conferences play out. The next one is scheduled for Nairobi on 12-13 June. This will be a difficult meeting for publishers as the African Group at SCCR has been particularly vehement in its call for an international treaty. The IPA is assembling a strong team of advocates for Nairobi and for the last of the regional conferences, to be held in Santo Domingo in the Dominican Republic on 4-5 July.