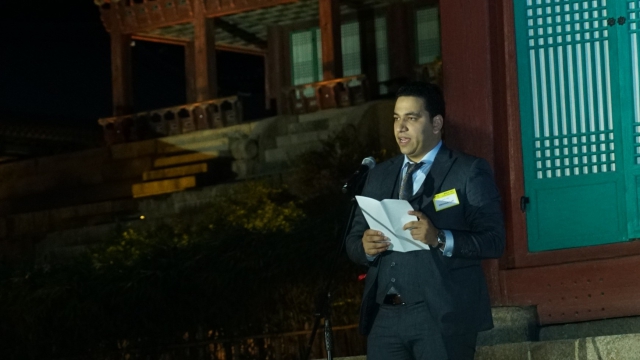 The emotional ceremony for the IPA 2019 Prix Voltaire was held in Seoul, Korea on 21 June where Khaled Lotfy’s brother, Mahmoud, received the prize on his behalf and delivered a powerful speech asking for Egyptian President el-Sisi to grant the publisher a pardon.

At the ceremony, Mahmoud Lotfy, also the business partner of Khaled Lotfy, spoke about the background to the Tanmia book shop, which has grown since 2009 to be a cultural hub in Cairo as well as an important distributor and a prize-winning publishing house. He was also supported by videos from award winning Arabic authors Saud Alsanousi (Kuwait), Ibrahim Abdelmaguid (Egypt), Sinan Antoon (Iraq) and Ibrahim Nasrallah (Jordan / Palestine).

In a letter that was read out during the ceremony Khaled Lutfi confirmed: ‘this award came at a time when I needed strength, confidence and patience to face the great ordeal I am going through, an ordeal I never expected throughout the course of our work in supporting culture and providing all that is new and valuable for readers, without any biased affiliations or political orientations.’

Let us read, and let us dance; these two amusements will never do any harm to the world.

Mahmoud Lotfy said: Not only is the Prix Voltaire a great honour, it is also a source of consolation in these very difficult times. We receive daily messages from readers asking about Khaled and wishing him a brighter future, where the right to knowledge is empowered and ideas are as valuable as life.

Hugo Setzer, IPA President said: We are proud to give our 2019 Prix Voltaire to Khaled Lotfy and call on President Abdel Fattah al-Sisi to grant him a presidential pardon. He has already served over a year in prison, away from his loved ones. A high price for publishing a book.

Chul-ho Yoon, Korean Publishers Association President added: It is an honour to host this ceremony and to demonstrate our commitment to the freedom to publish and freedom of expression. These freedoms are hard won but can erode quickly.

The ceremony took place at the Changdeokgung Palace as part of the Seoul International Book Fair Programme and was co-organised by the IPA, the Korean Publishers Association and the Korean Cultural Heritage Administration.

About the IPA Prix Voltaire
The IPA Prix Voltaire is unique in honouring the freedom to publish, without which many forms of freedom of expression would be impossible. Publishers who provide authors with the tools to disseminate their written ideas assume the same risks as the writers themselves.