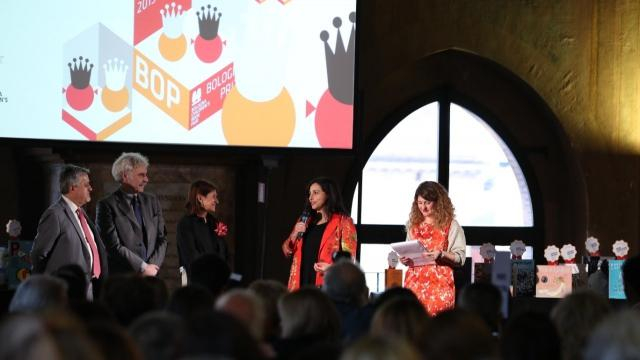 Catching up on news from April, IPA was proud to support Bologna Children’s Book Fair’s Prize for the Best Children’s Publisher of the year, the BOP award. IPA’s Vice President, Bodour Al Qasimi was at the award ceremony.

Established by the Bologna Children’s Book Fair in collaboration with the Association of Italian Publishers (AIE) and the International Publishers Association (IPA), the BOP – Bologna Prize for the Best Children’s Publishers of the Year acknowledges publishers in each of the six areas of the world that have stood out in terms of their creativity, courage and the quality of the editorial choices over the last year. The award ceremony of the seventh edition of the prize was held on 1 April at Palazzo d’Accursio in Bologna on the first day of the Fair as is customary.

Here follows the list of the winners, all selected by a jury made up of publishers:

For Africa the winner is Sub-Saharan Publishers, Ghana, founded in 1992 and specialized in children’s books that deal with environmental themes

For Asia the prize went to the Locus Publishing Company, Taiwan, founded in 1996, its publications aim to capture the spirit of “future, adventure culture”.

For Europe the winner is the Portuguese Orfeu negro. Founded in 2007, this publisher focuses on the arts and first ventured into the world of children’s publishing in 2008, in particular with illustrated books.

For North America the top podium place is for Comme des géants, Canada, a young independent publisher specialised in books for infants that stood out for the quality of its narratives, literature and graphics.