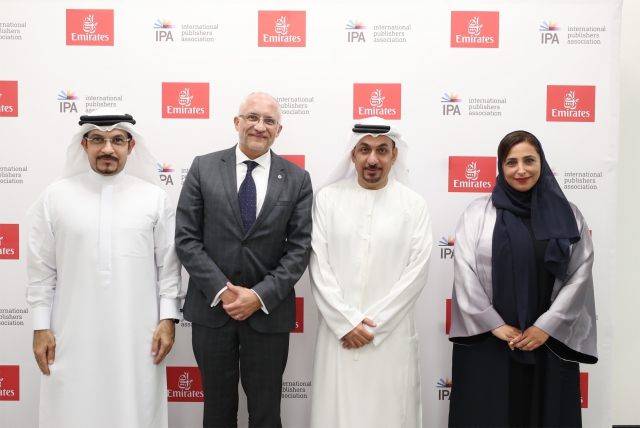 The International Publishers Association’s has signed an official agreement with Emirates Airline to become its Exclusive Global Transport Partner as the Association ramps up its international programme of events.

The agreement will see Emirates play a vital role in bringing key stakeholders together at IPA’s flagship events such as its 33rd International Publishers Congress, being held in Lillehammer in May 2020 and future Regional Seminars planned for Marrakesh, Morocco and a first ever Seminar in Latin America to be announced soon.

The agreement follows Emirates sponsorship of the IPA’s Regional Seminars in Nairobi, Kenya and Amman, Jordan. The ground-breaking seminars reached hundreds of publishing professionals from the two regions as well as being the focal points for meetings between the IPA and African and Arab publishers’ associations. The Regional Seminars have underlined the potential of digital technologies, and young, dynamic entrepreneurs in the region to overcome many of the challenges of traditional publishing while also presenting an opportunity to bring a diverse range of voices and stories to the wider world.

Hugo Setzer, IPA President said: Emirates has been a valuable sponsor of our Regional Seminars in Nairobi and Amman and we’re delighted to be able to work with Emirates further to build bridges between the international publishing community and grow the love of reading around the world.

Adil Al Ghaith, Senior Vice President Commercial Operations for Gulf, Middle East and Central Asia said: “Emirates is proud to support the International Publishers Association and their work to grow the publishing ecosystem around the world. With Emirates’ extensive network, the IPA will be able to touch an even larger audience to build capacities, foster greater cultural dialogue and exchange of ideas. This sponsorship, along with our support for the Emirates Airline Festival of Literature, is also in line with Emirates’ objective to support events and organisations that enrich the lives of people in the communities that we serve and support culture and arts.”

The International Publishers Association (IPA) is the world’s largest federation of publishers associations with 81 members in 69 countries. Established in 1896, the IPA is an industry body with a human rights mandate. The IPA’s mission is to promote and protect publishing and to raise awareness of publishing as a force for economic, cultural and social development. Working in cooperation with the World Intellectual Property Organization (WIPO) and numerous international NGOs, the IPA champions the interests of book and journal publishing at national and supranational level. Internationally, the IPA actively opposes censorship and promotes copyright, freedom to publish (including through the IPA Prix Voltaire), and literacy.

Emirates Airline is the world’s largest international airline, flying to 158 destinations in 85 countries. Emirates operates nearly 270 modern aircraft and is the world’s largest operator of the Airbus A380 and Boeing 777 family of aircraft. The airline’ s industry trendsetting amenities, regionally inspired cuisine, award-winning in-flight entertainment system – ice – and unmatched hospitality provided by its iconic multi-lingual Cabin Crew from over 130 nationalities have made Emirates one of the world’s most recognized and well-loved airline brands.