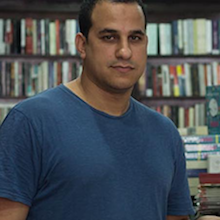 As Cairo International Book Fair starts today, one Egyptian Bookseller and Publishing House will not be attending. While Khaled Lotfy, co-founder of the Tanmia Bookshop and founder of Tanmia Publishing House, sits in jail serving his five-year sentence, his publishing house has also been excluded from the Fair by the organisers, citing security concerns.

Tanmia was informed of the decision in December. The International Publishers Association contacted the Cairo International Book Fair in early January, urging them to change their position and show solidarity with Tanmia at this challenging time as Khaled Lotfy’s final appeal against his five-year prison sentence had been rejected.

Tanmia Bookshop opened in 2011 and later launched a highly respected publishing house. The publishing house brought out a number of acclaimed authors in translation as well as original works in Arabic, including a children’s book version of Mahmoud Darwish’s poem “Think of Others,” which won an Etisalat Prize for Arabic Children’s Literature.

About The Angel: The Egyptian Spy Who Saved Israel

The Angel: The Egyptian Spy Who Saved Israel was written by Israeli author Uri Bar Joseph and profiles Ashraf Marwan – former Egyptian President Gamal Abdel Nasser’s son-in-law and a close advisor to former President Anwar Sadat – and alleges that he spied on Egypt for Israel. Egyptian authorities have long denied claims that Marwan betrayed his country and hail him as a hero, with former President Hosni Mubarak issuing a statement upon his death in 2007 saying, “I do not doubt his loyalty.”

The International Publishers Association (IPA) is the world’s largest federation of publishers associations with 83 members in 69 countries. Established in 1896, the IPA is an industry body with a human rights mandate. The IPA’s mission is to promote and protect publishing and to raise awareness of publishing as a force for economic, cultural and social development. Working in cooperation with the World Intellectual Property Organization (WIPO) and numerous international NGOs, the IPA champions the interests of book and journal publishing at national and supranational level. Internationally, the IPA actively opposes censorship and promotes copyright, freedom to publish (including through the IPA Prix Voltaire), and literacy.

About the Prix Voltaire