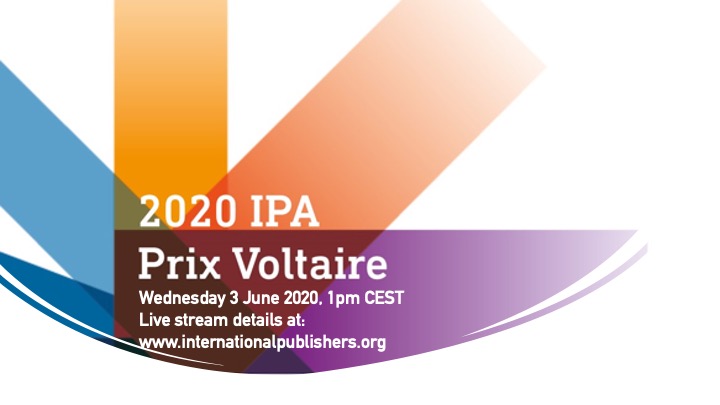 2020 Prix Voltaire laureate to be revealed live on 3rd June

On June 3, IPA will reveal the laureate of the 2020 Prix Voltaire during an online award ceremony, thus recognizing exemplary courage in upholding the freedom to publish and enabling others to exercise their right to freedom of expression. The IPA Freedom to Publish Committee has selected the winner from the four short-listed candidates, all remarkable and inspiring publishers who are willing to face risks to disseminate books they deem valuable to readers. This year’s finalists include Avesta Yayinlari (Turkey), Mr Chong Ton Sin (Malaysia), Liberal Publishing House (Vietnam) and Maktaba-e-Daniyal (Pakistan).

With May 30 marking Voltaire’s death day, IPA looks forward to announcing the laureate shortly after that date on June 3, 1pm CST here.

We hope you will tune in and get inspired by the exemplary courage the winner has displaced in fighting for freedom to publish.

The announcement had originally been scheduled for the 33rd International Publishers Congress in Lillehammer.

Avesta was founded in 1995 and has published around 700 books,with some in English and French but most in Kurdish and Turkish. The company has faced lawsuits over the years for a number of its books. Upon the opening of a bookshop in south eastern Turkey in 1999 these lawsuits intensified and their warehouse subject to an arson attack which destroyed 3000 books and ultimately the closing of the store in 2016. The owner of the publishing house, Abdullah Keskin, was investigated in 2019 on charges of propaganda for terrorist organizations. The company received the Turkish Publishers Association Freedom of Thought and Expression award in 2019.

After many years of political activism and 8 years in detention, Mr Chong Ton Sin launched Gerakbudaya Publishing House in 2000 and then an academic imprint SIRD in 2003. His intention was to create a publishing house and distributor for controversial but important books for Malaysians to read at affordable prices and in all the country’s major languages. At the time, much of Malaysian media and publishing was directly or indirectly controlled by the government through ownership and censorship. Recent books included The Sarawak Report on the 1MDB scandal, other publications have focused on other voices from Malaysia’s recent political history as well as on deforestation (a source of corruption in Malaysia).

The publishing house was founded in February 2019 in Ho Chi Minh City by a group of dissidents as a direct challenge to the government’s control of the industry and to bring the non-fiction work of Vietnam’s growing crop of dissident writers to the nation’s readers. In Vietnam such publications are known as Samizdat - the illegal copying and distribution of books - and are banned by the government as "anti-state" activity. Involvement therein carries a jail term of 20 years, forcing Liberal Publishing House to operate clandestinely. According to Amnesty International’s Vietnam campaign team, police have questioned nearly 100 people for either owning or reading books printed by Liberal Publishing House. On 3 January 2020, authorities detained activists for reading books from Liberal Publishing House in “an apparent crackdown on independent reading in the country”. Amnesty International and Human Rights Watch have called for the intimidation and harassment of Liberal Publishing House to stop.

The award-winning satire “A Case of Exploding Mangoes” by journalist turned novelist Mohammed Hanif about Pakistan’s former Martial law administrator /president Gen Zia-ul-Haq was published in Urdu in Pakistan by Maktaba-e-Daniyal in November 2019. In January 2020 copies were confiscated in a raid on the publisher and the author reported to have received a defamation notice from Gen Zia’s son. Author Mohammed Hanif has said that people claiming to be from the ISI barged into his Urdu publisher Maktaba Daniyal offices, confiscated all copies of the Urdu translation of A Case of Exploding Mangoes. The manager was threatened, and officials had demanded information on his whereabouts. Hanif also said security agents seized stock from his Karachi publishers and bookshops in Islamabad and Lahore. The book was launched to acclaim in English in 2008, when it, was long-listed for the Man Booker prize. The book won the Commonwealth first book prize in 2009.

The sponsors of the 2020 IPA Prix Voltaire are, in alphabetical order: