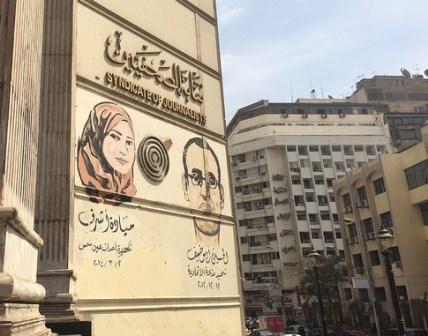 Intentionally or not, Egyptian police marked World Press Freedom on 3 May by raiding the Syndicate of Journalists, in Cairo, and arresting two journalists.

The journalists' crime? Writing about an Egyptian government decision to hand over two islands to Saudi Arabia and calling on their readers to protest the decision.

In response, crowds of angry journalists staged a demonstration outside the building to denounce President Abdel Fattah el-Sisi and his government for crushing media freedom.

The following day, the IPA spoke to acclaimed Egyptian author, Alaa Al Aswany, to ask what life is like today for free-thinking writers in Sisi's Egypt.

What happened at the Syndicate of Journalists?

The security forces entered and arrested two journalists. According to the law they're not supposed to enter before talking to the syndicate members. They took away the mobiles of all the people there to stop them from filming and they arrested two journalists, so this is just another example of what's happening here. Freedom of speech in Egypt is worse than at any previous time.

Do you think the media freedom situation in general is deteriorating?

Yes, because the journalists' syndicate in Egypt has existed for over 100 years, and this never happened before, where you have security agents in masks manhandling people. It means they're from the special operations department, whose job is to fight terrorists. And they went inside the building and terrorized everybody and took two journalists. This has never happened before.

"Freedom of speech in Egypt is worse than at any previous time."

Not even under Mubarak?

No, never. Under the British occupation it never happened, under Nasser, who was a real dictator, it never happened. So it's significant. Today all the journalists and all the unions – the doctors, the engineers, pharmacists – are showing solidarity with the journalists. We have a novelist who's been in jail for two years now because of the content of his novels: his name is Mohamed Nagui.

And we have more than 20 journalists in prison. Many of them were just doing their job, with cameras in confrontations between the people who were protesting and security forces. They were arrested and brought to court and many of them are in prison now. So the regime doesn't see the difference between a journalist and a protester.

"The regime sees no difference between a journalist and a protester."

Do you fear for your own freedom?

For two years now, I can't publish newspaper articles in Egypt. The ban is not official, but it is very efficient. They put huge pressure on the owners of the newspapers not to publish my articles. And I am banned from TV as well, state TV and private channels. So of course I don't feel comfortable in this situation. People who criticize the regime, like me, face character assassination. I have been subjected to terrible accusations on TV, the least of which is that I'm an agent of foreign services. I tried to bring a case against the people who accused me on TV, but the case was dropped by the prosecutor, so they have protection from the law.

Have you faced other attempts to silence you?

How will you tackle these issues as a writer?

I have two books I'm writing now. I have a novel which deals with the theme of revolution. I don't expect to be happy when I finish this novel. And then I have a book about dictatorship, which will be published in London first. I'm dealing with dictatorship as a phenomenon, and of course people in Egypt who are in charge will find themselves in this book. I also have an agreement with Deutsche Welle to write a weekly article, so I work and I do my duty and I never hesitate to keep writing what I think, despite all these difficulties.

"This regime is a new version of the Mubarak regime – the generals are the same ... they want revenge."

What is the mood in Egypt since the Arab Spring?

Most writers and journalists having trouble now are revolutionary; they made the revolution. And the origin of our troubles is that this regime is a new version of the Mubarak regime, the generals are the same, and they never forget the people who participated in the revolution; they consider them troublemakers, they blame them for Mubarak being sent to prison. Accordingly, they want revenge.

I don't feel comfortable, but I'm still optimistic, because I look at history and I know the revolution will overcome, in the end, and history is always on the side of the revolution. It will take time but I'm optimistic. I think revolution is irreversible. Egyptians will never be scared again, so I'm optimistic about the future despite all these hardships and difficulties.

Nobody will ever be able to stop the future from coming.