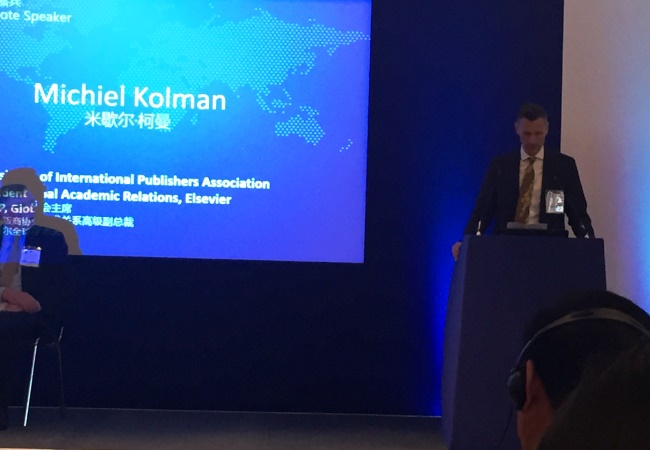 IPA president: our members' collective voice now carries further than ever before

IPA President Michiel Kolman told a seminar at London Book Fair that Chinese publishing’s inclusion in the IPA had ‘marked an important expansion’, meaning that the IPA membership's 'collective voice today carries further and speaks for more publishers than ever before'.

Addressing the event, co-organized by the Publishing Association of China (PAC), the China Publishing Group, The London Book Fair and the IPA, Dr Kolman said: ‘This growth of the IPA family – along with publishers associations from Bangladesh, Greece, Iraq, Ivory Coast, Jordan, Mauritania, Morocco, Peru, and Senegal – means the IPA now represents publishers that service around 5.6 billion people worldwide – 75% of the world population. And this is how the IPA makes a difference, as we lobby for robust copyright frameworks and freedom to publish protections, as we advocate for mainstreamed literacy and accessibility initiatives and make the case for professional book and journal publishing everywhere.’

He added: ‘By building constructive, inclusive dialogues with publishing stakeholders in the world’s major markets, we increase our influence and advance our agenda on the platforms that matter – intergovernmental forums, such as the United Nations and the European Union, and national governments as well.’

Dr Kolman also charted the impressive growth of Chinese publishing, from 'a craft that evolved into a trade that grew into a ($10bn) industry', thanks to 'a vast, literate population that cherishes education and self-improvement'.

During his speech, Dr Kolman expressed the IPA’s expectation that the PAC would continue to build its contribution to the Association’s primary objectives of copyright and freedom to publish. He ended by inviting all attendees to the 32nd International Publishers Congress, February 10-14, in New Delhi, which has adopted the slogan: 'Shaping the future: innovation meets experience'.

The IPA and the Federation of Indian Publishers, which is hosting the Congress, will publish details throughout 2017.

Besides China’s role in the world publishing industry, the seminar was also held to launch a new monthly magazine, called International Publishing Journal, which features industry news and opinion from international publishing leaders.

Taking to the podium, Richard Charkin, Executive Director of Bloomsbury and Dr Kolman’s predecessor as President of the IPA, commended the work that had gone into producing a ‘top quality’ magazine, the inaugural edition of which includes a feature penned by him.