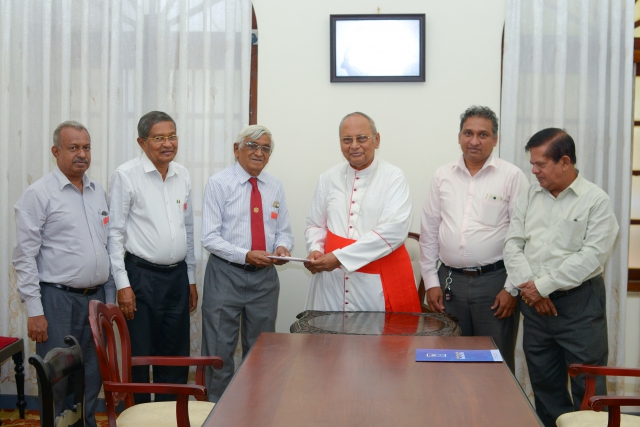 A delegation of the Sri Lanka Book Publishers Association (SLBPA) met Malcolm Cardinal Ranjith, Archbishop of Colombo on May 16, 2019 and donated Rs 450,000 to assist poor students affected by the bomb blasts in the 3 churches on April 21. The Publishers Association also offered scholarships with a monthly stipend to 6 students until they graduate from University.

The President of the Sri Lanka Book Publishers Association, Vijitha Yapa, said, "The action taken by you in harnessing the help of others to bring healing and calm and to ensure that peace endures is something that we as citizens are deeply touched by. The leadership you displayed has been a tremendous inspiration to us all of how to keep a cool head amidst destruction and chaos and find answers instead of blaming others".

The Cardinal thanked the SLBPA for their thoughtfulness and said there are 170 children who became destitute when their parents were killed in the attacks. He deplored the action of some destructive elements whom he described as cardboard heroes who were more interested in the votes they can entice than thinking of the destruction and disruption they are causing, and tarnishing Sri Lanka's image.