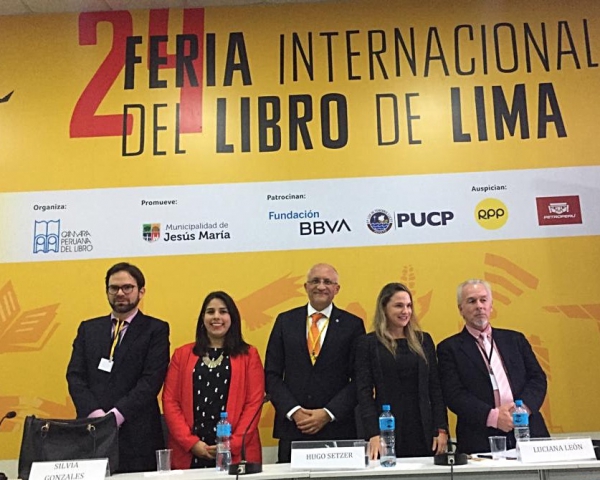 IPA President Hugo Setzer attended the Lima International Book Fair from 22-25 July, taking part in discussions around VAT and elivering a keynote on the Freedom to Publish.

The conversation centred on a proposed new book law being discussed currently at the Peruvian Congress. The bill contemplates maintaining the VAT exemption for books, which was also backed by President Martin Alberto Vizcarra during his speech at the opening of the fair. In his intervention, Hugo said he found the VAT exemption positive for the industry, but that a good public policy in favour of books and reading should be based on the respect of copyright and the freedom to publish, should consider the whole book ecosystem of authors, publishers and librarians and should also include other aspects, like adequate funding of libraries. Furthermore, Hugo talked about the work publishers around the world are doing to make books available in accessible formats for visually impaired people.

Hugo also delivered a keynote speech on Freedom to Publish. In his speech, he presented an overview of the problems publishers face in many parts of the world with censorship and self-censorship and the work IPA does to support them, especially with the Prix Voltaire, awarded this year to Egyptian publisher Khaled Lofty. Hugo stressed the importance of standing together as publishers to defend our right to contribute to society by publishing any work, so that there are no more publishers silenced, imprisoned or even murdered.

During the fair, IPA member, the Camara Peruana del Libro, also organized a meeting with top officials of the Peruvian Copyright Office, Indecopi. The discussion centred on the importance of copyright as an enabler for the creation and dissemination of new works, joint strategies to fight book piracy and the next steps to create a much-needed collective management organization in Peru.