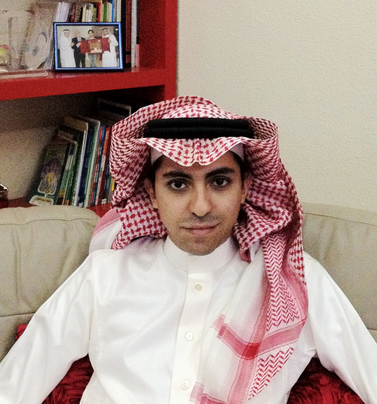 The International Publishers Association (IPA), the world’s largest federation of publishing associations, has named the jailed creator of a secularist Saudi website, Raif Badawi, the first winner of the IPA Prix Voltaire, formerly the IPA Freedom to Publish Prize.

Presenting the prize at the International Publishers Congress gala dinner, in London, the President of English PEN, Maureen Freely, said Badawi fully embodied the values and courage that the CHF 10,000 (GBP 7,300 / EUR 9,150) prize seeks to honour.

Badawi’s wife, Ensaf Haidar Mohammed, had travelled from Canada – where she and their three children secured political asylum in 2013 – to collect the award on her husband’s behalf.

Mrs Mohammed said: “It’s very touching, and encouraging, to see Raif’s courage being recognized by the international publishing community. We will use this money to keep fighting for my husband’s release and to highlight the cruel suffering of free speech advocates in Saudi Arabia.”

Badawi, 32, set up the now closed Free Saudi Liberals forum to facilitate political and religious debate in a state known for its draconian oppression of free expression. He did so aware that he was risking everything to publish his own pro-reform, secular ideas and those of other dissenting Saudis.

He is currently four years into a 10-year prison term and has endured 50 of 1,000 lashes, for hosting online commentary deemed blasphemous. He also stands accused of apostasy, which carries an automatic death sentence in Saudi Arabia, although as yet no court has ruled on this charge.

IPA President Richard Charkin said: “The worldwide publishing community will continue to highlight the plight of oppressed publishers and writers like Raif. If we don’t, unscrupulous regimes everywhere will only tighten their grip further. Grateful thanks to our generous sponsors, without whom the Prix Voltaire would not be possible.”

In 2005 the IPA created the IPA Freedom to Publish Prize to honour a person or organization that has made an important contribution to the defence and promotion of freedom to publish. This year, the IPA renamed it the IPA Prix Voltaire, in tribute to the French philosopher and writer François-Marie Arouet (penname Voltaire), who preached a doctrine of tolerance and free expression long before such terms were in general use. In addition, from 1755 to 1759 Voltaire lived in Geneva, Switzerland, where the IPA is based, before moving to the nearby French border town of Ferney, which was renamed Ferney-Voltaire in his honour after the French Revolution.

The CHF 10,000 prize money is provided by contributions from the following sponsors:

More details about the IPA Prix Voltaire, including previous winners, can be found here.